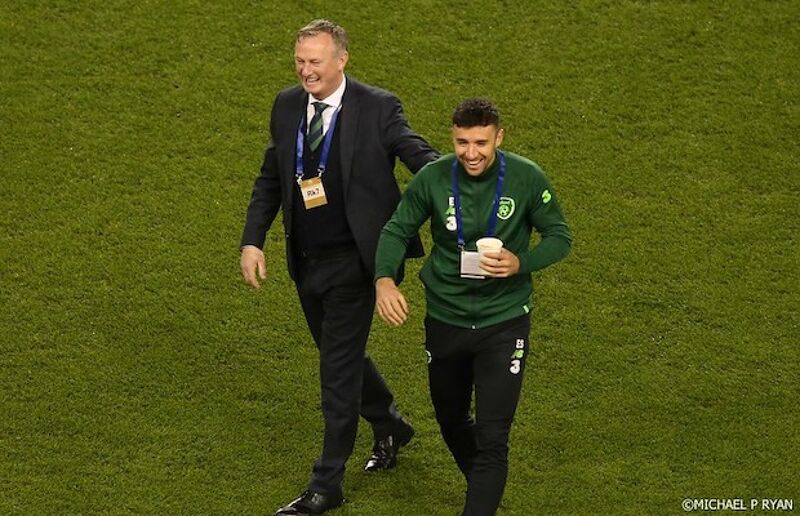 With the EURO 2020 playoff against Slovakia set for early October, Republic of Ireland defender Enda Stevens is hoping the opponents awaiting the Boys in Green remain on the green list – keeping open the possibility of fans being able to cheer on Ireland.

“We can’t wait,” said Stevens talking about the playoff. “We’ve gone a long time without internationals and we are looking forward to playing the Slovakia game which is going to be huge.”

The Sheffield United Premier League player was speaking to this reporter in an interview broadcast as part of Shamrock Rovers’ ‘We’ll never die’ club fundraising campaign.

Earlier this week, the 30-year-old former Shamrock Rovers player, was nominated alongside his Sheffield United teammate David McGoldrick, and Glenn Whelan, for the Irish Senior Men’s International Player-of-the-Year. “I’m delighted and it is a big achievement to be nominated.”

During Stevens’ time with Ireland he has played with both Graham Burke and Jack Byrne when the Shamrock Rovers players earned their senior international caps.

“There is plenty of talent in the league. You think back to Stephen Kenny’s Dundalk team and how well they did in their European campaign. We are always producing these players.

“Graham Burke got called up for Ireland and he managed to score while he was playing in the League of Ireland which was great. Jack Byrne doesn’t look out of place when he is training with the squad. It’s brilliant to see and we need more of it.”

Stevens remembers his time own time playing with Rovers with great fondness. He was part of a Hoops squad who won back-to-back League of Ireland titles and had great success in Europe – qualifying for the Europa League group stages in 2011.

“I’ll never forget the night out in Bray (in 2010) when we won the league on goal difference by two goals. It was great to get over line as we knew what it meant to the fans who had been waiting for so long for a league title (since 1994).

“The second season we won it at UCD with a late goal and had all the fans running on the pitch. The win over Partizan (Belgrade) was something special. To go over there to their home turf, it was really tough.

“You always look forward to playing European football. They are really exciting matches to play in. The standard of football is different. You want to prove yourself at that level and it was a chance for me to show what I could do. Thankfully I got the move off it to Aston Villa.”