Postcard from Phase 3 - Masks On in Abbotstown 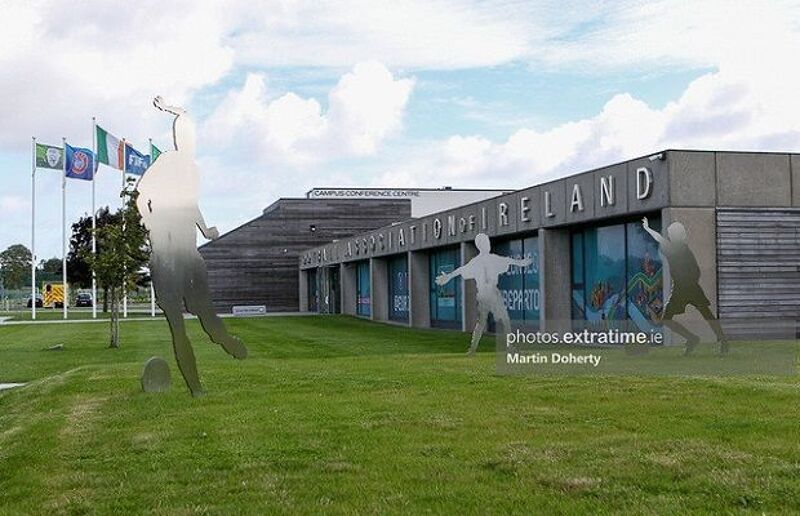 Republic of Ireland manager Stephen Kenny has had a more unique inauguration as senior boss to most, that much is quite clear.

Giovanni Trappatoni was unveiled at the RDS, Martin O’Neill was at the Gibson Hotel while Mick McCarthy was also spoke to by the media for the first time in the bowels of the Aviva Stadium.

Stephen Kenny on the other hand, was afforded no such luxuries. His first press conference as manager took place through a Microsoft Teams conference call, and his second – while a bit more normal – was still not the normal we once knew of.

The FAI Headquarters in Abbotstown are secluded to say the least – you think you’re there and then you’re still not there. Oh yeah, and as this reporter once found out, it is effectively an extra fiver in a taxi journey from the main entrance to the Sport Ireland campus.

For this reporter who was there to witness the first Stephen Kenny post-lockdown press conference – it was strange.

Rather than all the assembled media heading into a media room all at once, it was staggered – with different types of media handed staggered starting times to begin speaking to the new Ireland boss.

First up was the photo shoot, second was the television interview, online sites (like ourselves at extratime.com) were up next and then the rest of the day was arranged for the newspapers.

From the start, it was a surreal experience – from getting in a taxi that had a Perspex screen between myself and the driver, to wearing a mask throughout the duration of the visit to FAI HQ.

Socially distant conversations were had by all, but this new normal will take another while to get used to at least. God bless us all at League of Ireland press boxes!

After a while, we were brought inside FAI HQ to the boardroom – who would have ever thought you would be listening to a former Longford Town manager from inside a FAI boardroom?

The room – which was sanitised both before and after our visit – would remind one of being inside a college tutorial, with the uncanny and somewhat bizarre similarities of sitting in front of a tutor while they spoke (well in my case anyway…).

If anything, that was the only thing that felt somewhat ‘normal’. We placed our phones on a tray that a member of the FAI staff passed around before it was placed in front of the man himself.

Maybe that was normal too. Then again, we were all sitting two metres away from each other so that probably made it feel less normal.

And despite all the current upheaval both inside and outside Abbotstown caused by the current Covid-19 pandemic – Kenny remained his passionate and thoughtful self.

Strikingly, the former Dundalk boss, along with his backroom team of Damien Duff, Keith Andrews and Ruaidhri Higgins will be the first to base themselves from within Abbotstown for the most part.

“Football needs to be the centre of the FAI. Myself, Keith Andrews, Damien Duff, Ruaidhri Higgins – we all live in Ireland. That’s never happened before, where the whole management team is based in Ireland.

“We will be based in Abbotstown, that doesn’t happen,” Kenny said this morning. “That office inside has probably been vacant a lot of the time, as managers have traditionally lived abroad.”

Kenny spoke, we listened, and that was generally that. Nothing too spectacular – Slovakia, potential call-ups and three at the back – that was that really.

There was a number of notable things mentioned by the former Lilywhite boss – from talking down hopes of a potential call-up for Will Smallbone against Slovakia to speaking about what behind closed doors games may look like.

Football will be coming back very soon; the barbers are open, and the carnage that is Dublin City on Friday and Saturday night’s is beginning to re-emerge – but rest assured this new normal isn’t all that normal.

Hand sanitisers, face masks and staggered media briefings – we’ll take it, and it is greatly appreciated that the FAI were willing to open up its doors to the media in these strange times.

It’s not what we’re used to but it’s good to be back out there in some capacity – and as one reporter put it today ‘without trying to sound old isn’t it great to see people again,’ that, it most certainly was.

Here at Abbotstown this morning for a Stephen Kenny media briefing - updates to come over on @ExtratimeNews pic.twitter.com/pTcoM7EOaj