On this day four years ago, Robbie Brady's header fired Ireland into the knockout phase of Euro 2016 in France 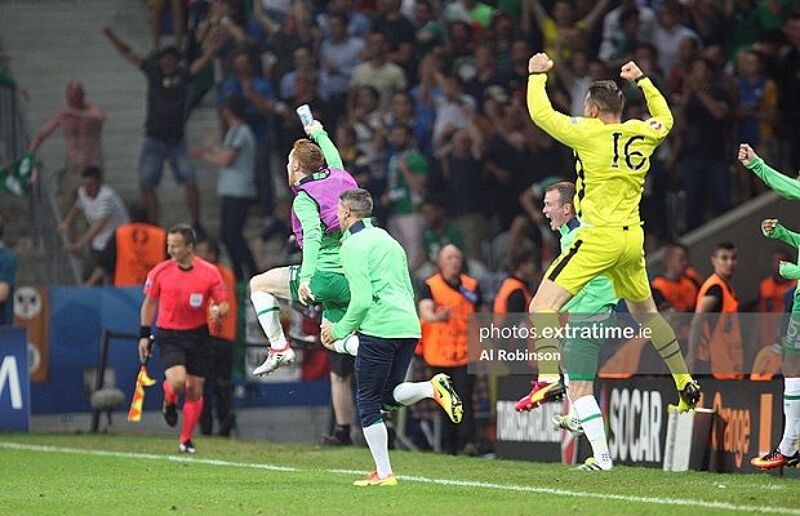 On this day in 2016, Lille was turned green when Robbie Brady’s second-half header earned Ireland their first-ever place in the knockout stages of the European Championships.

The clock was ticking precariously towards 90 minutes when substitute Wes Hoolahan produced the cross for then-Norwich City winger Brady to nod home.

Almost 45,000 packed in to Stade Pierre-Mauroy in the northern French city for a re-run of Ireland’s famous one-goal victory in the opening game of USA ’94.

They witnessed an Irish performance of rare poise, the best of Martin O’Neill’s reign, against an Italian side no less dangerous for the fact they had already sealed top spot in the group.

years ago, Robbie Brady did this and we still get shivers up our spine!

James McClean, one of four brought into the starting line-up following the 3-0 defeat to Belgium, was unlucky not to be awarded a penalty after falling under Federico Bernardeschi’s challenge.

Ireland’s last chance looked to have gone when Hoolohan showed unusual hesitation when played in on goal following an Andrea Barzagli slip.

The Portland Row magician redeemed himself minutes later, however, as he curled in a perfect cross for the arriving Brady to nod past a stranded Salvatore Sirigu.