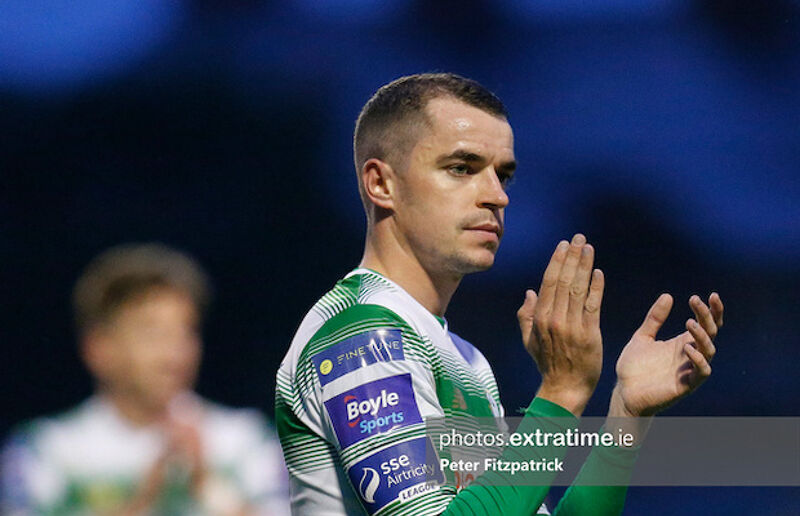 When the news emerged in pre-season that Shamrock Rovers player Sean Kavanagh would miss the first few months of the new campaign due to knee surgery, it certainly felt like a blow to the Hoops supporters for their club's title chances.

Kavanagh injured himself in the final league game of last season and only was able to start in the FAI Cup Final win over Dundalk with a pain killing injection. The versatile Kavanagh has emerged as a critical player for the Hoops in the last couple of campaigns since signing from Fulham.

Hoops Head Coach Stephen Bradley felt comfortable in letting Ireland under 21 international Trevor Clarke move on to Rotherham United last summer knowing he had Sean Kavanagh in his team – even with Neil Farrugia having signed from UCD but unavailable at that time due to injury.

Five games into the new season COVID-19 hit, grounding the country and football along with it to a halt. While it meant that Kavanagh wasn’t missing matches during the last three months, the lockdown presented its own challenge with his rehabilitation from surgery as he explained when talking to SRFCTV this week.

We caught up with Sean Kavanagh this week to and got this update on his return from injury and how things are in general #RingsendRover pic.twitter.com/MlCVWM9UXr

“A couple of weeks after the final, I went to see a specialist and he said the cartilage had come off the bone in my knee and I needed surgery. It was difficult,” said 26-year-old Kavanagh about doing his rehab during lockdown.

“I was in touch with Rovers physio Tony McCarthy a lot, as he was sending me stuff to do in the house. It is a lot harder, as if you are in with him in the physio room, he can talk you through it. I was doing stuff through skype and it was hard on your own making sure you were doing it right.

“I’ve been out for a couple of months but I’ve only missed five league games. I would have missed a lot more. Nobody wants this (pandemic) to happen but I’m fortunate that it happened when I was injured.”

Rovers returned to collective training in Roadstone last Monday for the first time since football went into hibernation in March and Kavanagh, who should be fit for when football returns, outlined the process for the players on the first day back.

“You travel over in your training kit with your boots, get tested (for COVID19), come out onto the pitch ready to go. Tony McCarthy tests our temperature and notes that all down. We weigh in, hand sanitiser, and mask up going up to the pitch and straight home after with no hanging around. In and out, as safe as you can.

“We are lucky that it is a big area with the astro and grass pitches plus the outdoor gym area which we can use. It was a couple of months since I’ve been able to kick a ball around so it was nice to be able to do some running with a ball out in the fresh air.

“It is great to be  back. It was a long few months and then it was tough not seeing the lads. You miss the craic you have and you miss your football and the daily routine and that was taken away from us.”

Players and staff from Dundalk, Shamrock Rovers and Derry City all test negative for Covid-19 in latest round of testing https://t.co/nCtpUw7g8F pic.twitter.com/zdxFQ18dcl