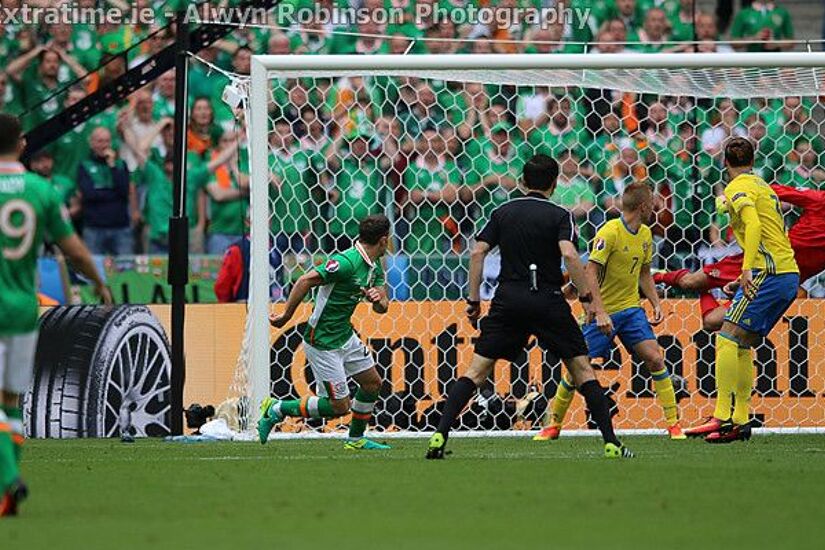 Watch: Four years ago today, it was all-square between Ireland and Sweden in Euro 2016 opener

On this day four years ago, the Republic of Ireland kicked off their Euro 2016 campaign in Paris with a hard-fought 1-1 draw against Sweden at Stade de France.

Wes Hoolahan opened the scoring for Ireland early in the second half before an unfortunate own goal from Ciaran Clarke ensured the points were shared.

Extratime.ie was front and centre (well, in the press box) for the game and brough you live updates and a match report on the full-time whistle.

There was little indication of the excitement that was to come when the half-time whistle blew at a humid Stade de France.

Ireland had largely kept the totemic Zlatan Ibrahimovic quiet for the opening period but created little of their own bar Robbie Brady’s infrequent set-piece deliveries.

Martin O’Neill’s side upped the tempo after the break and were rewarded almost immediately as a mazy Seamus Coleman run ended with the full back chipping into space in the box.

Peeling in off the left, the ball was met flush on the half-volley by the Norwich City magician, Hoolohan, and he planted the ball low in Andreas Isaksson’s net.

years ago, Wes Hoolahan got the EURO 2016 party started!

The lead wasn’t to last, however, as Ibrahimovic finally found himself in space close to goal and his low cross was inadvertently turned past his own goalkeeper by the helpless Clark.