Micheal Schlingermann: The year out helped me mentally and to get set up with life after football 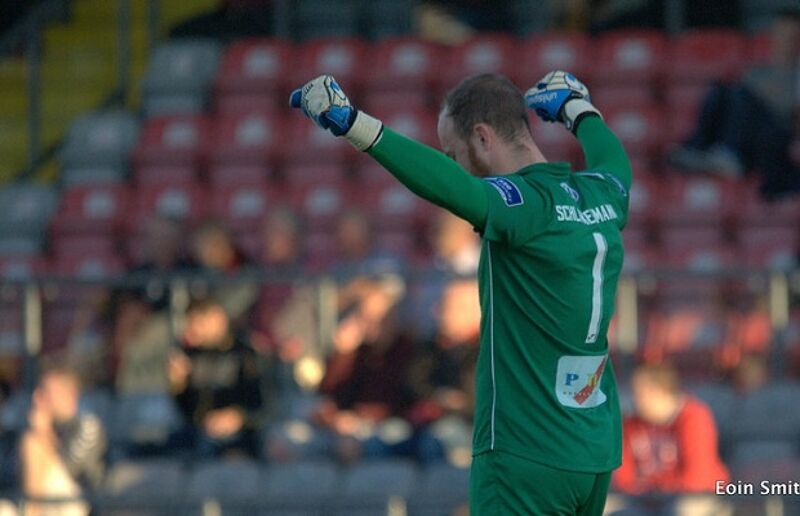 Honing your skills, exuding patience and making the most of an opportunity when it comes is appropriate in all team sports, but even more so in a specialist position like goalkeeping. Excelling in soccer and Gaelic football, Micheál Schlingermann has experienced the aforementioned in both codes throughout a career with many twists and turns.

During his formative years, Micheál featured in the 2009 All-Ireland Minor final for Mayo before switching to soccer. Trying his luck at Sligo Rovers, where first-team opportunities were limited, the desire for playing time led to a move to Athlone Town the next year.

"I think that was the most important decision I made in my early career. I was in and around Sligo's first team with Paul Cook in 2009 and after that was when they had their successful period, winning cups and eventually, the league. I was in college in Carlow and their manager Paul O'Reilly got me the connection in Athlone to go and play. I joined at 18/19 and Chris Bennion was at the club.

"When Chris left, that was my opportunity, so I got the rest of the season, which was great for my development. I wasn't perfect … I made mistakes and was learning my trade, but it was the ideal scenario. We were a mid-table First Division team, so the only pressure was put on by me. I went into the following season as first choice, playing every game bar a few."

At the end of 2011, Roddy Collins signed the young netminder for Monaghan United, but six months later the club withdrew from the League of Ireland: "It came out of the blue. We were on a mid-season break and nobody from the club contacted us, but it came out on social media first and then players started to inform each other. There was massive uncertainty. Everybody was out of contract, after not getting paid for a couple of weeks, anyway. I was lucky to have met with Mick Cooke, who took a few players from Monaghan. He knew most of them, having managed the club and took them to Drogheda. Other lads had more uneasiness and had to wait longer, but I think everybody got sorted in the end."

Happier times at Drogheda, where cup runs became the norm - the highlight being 2012's League of Ireland Cup final triumph, at Shamrock Rovers' expense. However, despite Schlingermann's selection as 2015 Goalkeeper of the Year and therefore named on that year's team of the season, the Boynesiders dropped out of the Premier Division.

"It was harder to accept due to the previous years' success, than because of my personal performances. It was bittersweet because it was acknowledged that I had a good year. I also won the supporters' and players' Player of the Year at the club, in addition to the other awards. To even get nominated for a relegated club was special because normally those who do well in the league or keep the most clean sheets get the nod. That year was one of personal pride, but disappointed that we couldn't keep the club up."

The Mayo man returned for a second stint at the Showgrounds, establishing himself as first-choice goalie until Mitchell Beeney's on-loan arrival from Chelsea in early 2018 saw Micheál and Sligo part ways midway through the campaign: "The year previously, I picked up a neck injury, which kept me out for the rest of the season. My goal was to get back to full fitness because it was such a serious injury. I did everything I needed over the off-season and came back feeling strong.

"The big surprise was that I started one game at the beginning of the season before being left out. I was disappointed and it wasn't deserved. Mitchell came in for a few games and wasn't convincing, which allowed me back in. After a few good performances I was left out again, which wasn't justified either. Whether it was pressure from others because there was a guy on loan from Chelsea, who was probably on bigger wages than I was.

"After that second time being left out, the relationship broke down between me and the manager (Gerard Lyttle). After a couple of weeks of not seeing myself get back in, I wasn't even number two and left out of the squad before I departed. That led to a lack of confidence and I ended up moving back to Mayo.

"When I left, I trained with Bray, to stay sharp and fit, but they had transfer restrictions because of financial issues. I ended up with no club for the rest of the season and took the year out. I had to find work in Mayo, which I did and I'm currently in the same job now. That's when the GAA came calling and I was able to do that for the year."

The Kiltimagh native teaming up with the Mayo senior panel coincided with the county winning the 2019 National Football League Division One title, but he's subsequently left again. Currently on Galway United's books, does the 28-year old, still young for a goalkeeper, ever see himself giving GAA a third go?

"I was released from the panel for the 2020 season. I had a decision to make over whether I'd resume playing Gaelic football and try to get back in or return to the League of Ireland. The dates ran parallel with the PFAI training camps, so once I was back in, I decided to return to what I've been doing for the last ten years. The year out helped me mentally and to get set up with life after football. It was good timing, but I wouldn't close the door on GAA when I get a little bit older."