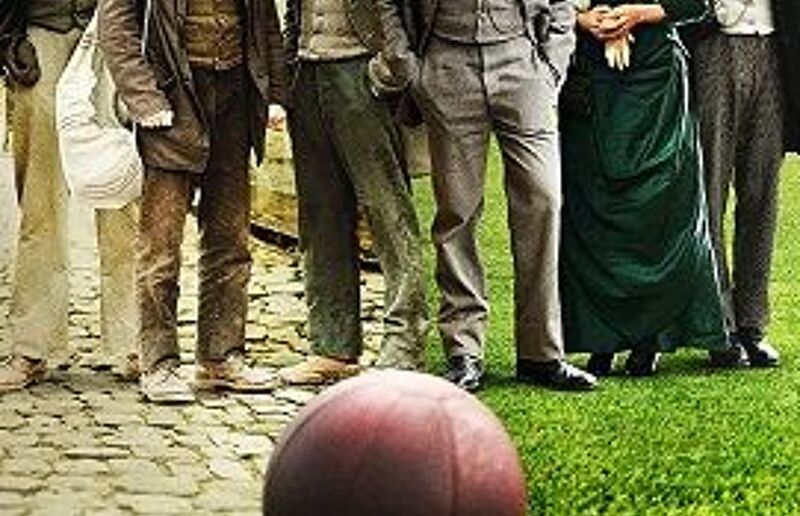 Julian Fellowes’ Netflix series the English Game attempts to bring the birth of professional football in England to life through the familiar prism of Victorian-era class division.

The Downton Abbey creator explores the critical point of football’s last schism as the old boys of the Football Association see their vision of the game threatened by the working-class north.

The battle between the self-appointed guardians of the game from England’s southern private schools and the rising northern industrial towns underpins the fictional account.

It hinges on the relationship between two historical figures, Old Etonians captain and future FA president Arthur Kinnaird and Fergie Suter, who is recognised as the first openly professional player.

Fellowes’ favoured trope of the downtrodden lower classes battling their uncaring betters makes the difficult birth of the people’s game an ideal subject to explore.

No drama-maker has attempted to tell the story on such a scale before and Fellowes skilfully and emotively weaves real-life events in with the imagined personal lives of those central to them.

As a historical document, Fellowes takes considerable liberties with the truth, inventing a new timeline and peppering the factual narrative with fictional events.

Much of this is necessary to tell a story from the perspective of historical figures about whom we know little concrete detail.

However the depiction of Kinnaird, played by the inordinately handsome Edward Holcroft, as the stereotypical toff with a conscience who emerges as the hero of the piece, is a little too convenient.

The football scenes themselves are uniformly terrible - even allowing for the standard of the time, few of the actors appear to even like the game, let alone be good at it.

Darwen appear to be inflicted with the worst goalkeeper the game has seen - there is no shot he cannot dive far enough away from.

The six-part series opens in the Lancashire mill town of Darwen, where the mill’s football team are preparing to compete in the quarter-finals for their first time.

Their opponents? The patrician Old Etonians who, laying claim to be among the private schools where the game flourished and was eventually codified, dominated its early years.

Nobody outside the old boys network had won the tournament by the time the series picks up in 1879 – indeed, Darwen were the first to reach the quarter-finals.

“I’ve seen how you play in Scotland – your passing game is the future of football,” are the incongruous first words of Darwen mill owner James Walsh, played by Craig Parkinson, to Suter.

Glaswegian Suter (played by Kevin Guthrie) had joined his childhood friend Jimmy Love in making the move south from Partick (not to be confused with the modern-day Partick Thistle).

Rumours have already reached the Old Etonians, many of whom populate the FA’s board, that Darwen’s newly-arrived ringers are breaking the amateur sport’s rules by taking money to play.

Kinnaird chides Suter before the match in London, noting: ‘I’ve made it Mr Suter, even if my best days are behind me.’

Tommy Marshall (played by Gerard Kearns) is somewhat more direct in his pre-match comments, remarking ‘let’s knock these posh bastards off their perch.’

The athletic, totemic figures on the Old Etonians side play a brutal but effective style of direct football, marching in formation up the pitch and taking out all in their path.

5-1 down at half time, Walsh stands down Marshall as captain and Suter leads them to play the ‘Scottish way’ and the final result is an improbable 5-5.

Kinnaird refuses to play extra time and is backed by the president of the FA, who happens to be Etonians goalkeeper Francis Marindin.

Darwen would lose the replay (in fact, there would be one more draw in between) but the scene is set with entitled toffs on one side and downtrodden mill workers on the other.

What unfolds is an engaging and fast-moving six hours of television that tugs at the heart-strings at the right times but is still, at its heart, mostly bullshit.

Romantic plotlines involving Suter and Love are affecting, if completely fictional, while Kinnaird’s gradual discovery of a conscience is arguably the dominant theme throughout.

One bizarre subplot sees Kinnaird miss a cup quarter-final to help wife Alma rescue a baby that had been sold by the owners of a women’s shelter to a back-alley orphanage.

Darwen are soon overtaken as the north’s biggest threat by Blackburn, which is in fact a composite of Blackburn Olympic, who became the first northern side to win the cup, and Blackburn Rovers.

The series comes to a head when Blackburn, who then count Suter among their professionals, are thrown out of the FA Cup at the final stage following a riot at a game with Darwen.

Kinnaird, who has by now completed his journey from entitled toff to supporter of the working class, turns on his friends at considerable personal hardship.

It provides a neat redemption narrative for that favourite of the Fellowes cannon, the enlightened upper-class saviour, but at the cost of writing the masses almost entirely out of their own history.