Eoin Wearen: I look back on Sligo as a period of 'what if 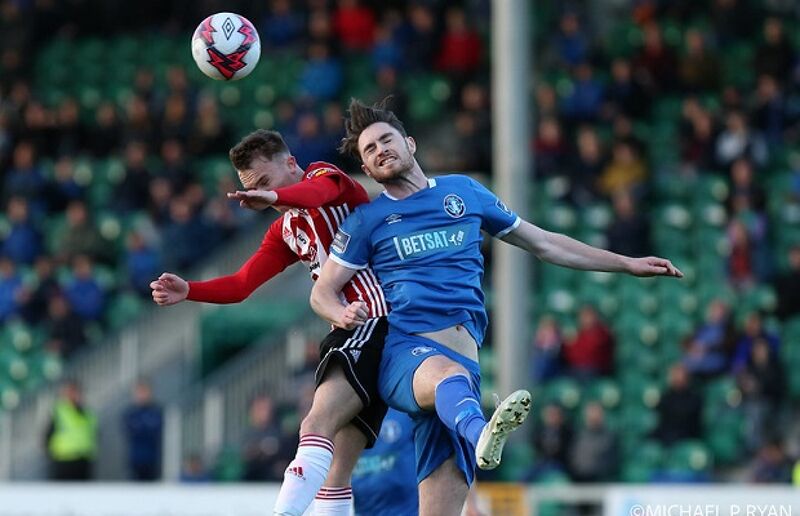 A domestic footballer's career can be short and precarious at the best of times, but throw in serious injuries and as Eoin Wearen can testify, the mind wanders towards life after playing quicker than expected.

As a youth, Eoin was fortunate enough to opt to pursue a professional soccer ambition, which saw him ultimately head to West Ham United after reluctantly declining to link up with the Dublin Gaelic football side:

"I grew up in a GAA family and it was my dad's first sport. For as long as I could, I tried to balance both, but as a young lad, it's difficult to commit to both. As I progressed with soccer, it was only when I turned 15 and knew I could go to England that I had to decide. I had to avoid risking injury, but even while I was in England, it would play on your mind. I'd always try to get back for All-Ireland finals and when you're watching the game, you sometimes think that could have been you."

While on the East London club's books, the young Irishman represented his country during the 2011 UEFA European U-19 Championships, partaking in an unexpected run to the semi-final: "Giovanni Trapattoni was manager of the senior team, so we'd been over in Rome at a training camp for about a week before we flew to Romania for the tournament. We knew we had a good side and deserved to be there, but I don't think anyone thought that we'd go so deep into the competition.

"We were together for almost a month, so it was great for team bonding. I think that was one of the reasons we got that far. We'd beaten the likes of Italy, Ukraine, the Czech Republic and Poland along the way, so we knew that we were there on merit. We just came up against a Spanish team that were a level above, better than us on the day and who went on to win the tournament."

After five years with the Hammers, interrupted by his first ACL injury and two appearances while on loan at Dagenham & Redbridge, the Dubliner returned home, turning out for Bohemians before following manger Owen Heary to Sligo Rovers in 2015: "When I was with West Ham, I used to watch Soccer Republic, seeing all the successful Sligo teams. A friend of mine, Stephen Folan, was signing for Sligo at the time and I knew another couple of players already there. It was a good move, but we didn't have the season we wanted, given all the optimism. We felt that there was something good brewing, but for some reason that didn't materialise. I look back on Sligo as a period of 'what if?'."

Returning to the Gypsies following his solitary season at the Showgrounds, Wearen settled back in until a second ACL injury all but wiped out the 2017 campaign, preceding a further move to Limerick: "That year witnessed a lot of transition. A different approach, with young, hungry players coming in, to go with the senior ones. The conversation with Keith Long in the off-season was that I was going to be a major part of the team - especially given the number of new players. I was flying during pre-season, but did my ACL again a couple of weeks before the league started. The timing of it was terrible … Missing the whole year and coming back for a cameo in the last game.

"The club got me doing opposition analysis. If we were away to Finn Harps, instead of travelling with the team, I'd watch our next opponents. I'd write reports, so Trevor Croly could prepare training for the week ahead, which kept me involved and making a contribution.

"I wanted to stay and Keith wanted me to, but we couldn't agree something suitable for both parties and then Limerick's offer came in. They had a good team, I had a couple of friends who moved there and that swayed my decision to go."

Well-documented financial issues and relegation ensued, leading Eoin to sign a two-and-a-half year deal with Glenavon. However, with an eye on the future, the 27-year old got out of his contract to become Colleyville Evolution's head coach in faraway Texas.

"It's been tricky over the last couple of years because I've had three major knee injuries, including two cruciates. After my first ACL, I did a Business Degree through the Open University and will be finished in a few months. I also started doing my coaching badges and got some experience with Bohemians' underage sides. Because of the injuries I've had, my career wasn't going to go into my mid-30s, so I saw coaching as my life after playing. While on the UEFA A Licence course in November, someone said they knew an Irish guy, Mark Scannell, who owned a club in Texas.

"I have no kids, no girlfriend or mortgage, so had nothing really to call me back. I enjoyed my time in the League of Ireland and playing with Glenavon, so it wasn't an easy decision, but I felt my career opportunities were over here. I've no regrets and I'm still able to play at semi-pro over here, so I'm happy. Explaining my decision to Glenavon, while still having 18 months on my contract wasn't ideal, but there were reasons why they were willing to let me go.

"If I wanted to to come to the US, my heart lied here and they didn't want to stand in my way. I told them two weeks before the January window opened, so it was a good time for them to find a replacement. If I approached them in September, then it might have been a different conversation."