Stephen Kenny: 'I want every schoolboy team looking at the senior international team and thinking 'that's how we want to play'' 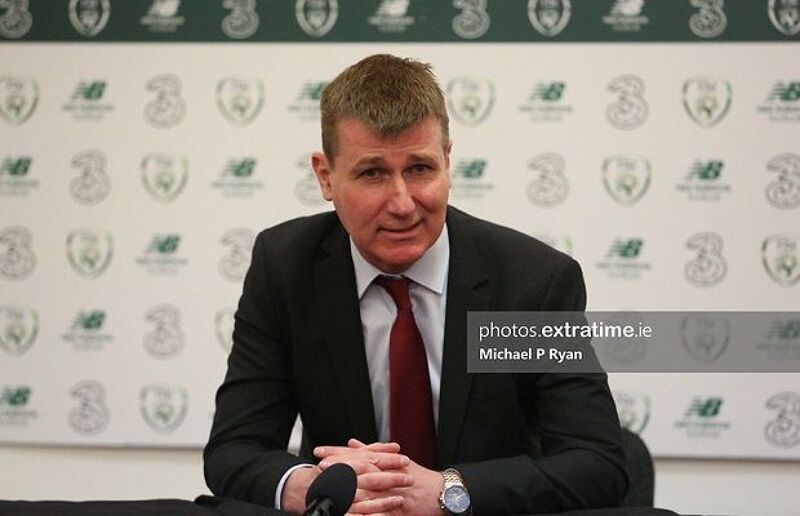 Stephen Kenny’s ambition as Republic of Ireland manager is to inspire the next generation with an entertaining and ambitious style of football.

The Tallaght native was appointed senior national team boss on Friday – four months ahead of schedule – after Mick McCarthy stepped down in light of Euro 2020’s postponement.

Kenny had been due to take over following the summer tournament but, with football off the table for the foreseeable future, he will instead take charge of Ireland’s eventual play-off with Slovakia.

That game could come as early as September but Kenny expects his first taste of senior action will come in the UEFA Nations League before attention turns to the must-win tie in Bratislava.

A less pressurised schedule comprising six games against Bulgaria, Wales and Finland will provide Kenny with opportunities to experiment and school the team in his preferred free-flowing style.

Irish teams historically haven’t been used to dominating possession and taking the initiative in games and, while Kenny acknowledges it won’t always come off, he’s set that as his ambition.

“I’ve only got one chance, it’s a short life,” said Kenny in what must be a first for an Irish manager, his debut press conference taking place from his living room via video conference.

”You’ve only got one opportunity here. I will ensure that I have conviction in the way I set the team up. Our ambition will be to dominate possession.

“In a lot of the games we can’t promise we will always achieve that, but I want people to come to the Aviva Stadium and look forward to going and watching this team.

“Ideally I would want every schoolboy team looking at the senior international team and thinking ‘that’s how we want to play.’ That’s what I would want.

“I hope they can really connect with the team over the next year. I’ve got to make sure the team play really well, first and foremost, and hope that the rest will follow.”

McCarthy, as he graciously signed-off from his second spell in charge, pointed out that he had helped to re-establish the connection with Irish fans after the somewhat frigid Martin O’Neill years.

Kenny’s task, then, is to bring back the theatre and pure entertainment that, arguably, hasn’t characterised any Irish side since the near-misses of the Eoin Hand era in the 1980s.

The 48-year-old earned respect across the continent amid Dundalk’s adventure to the group stages of the Europa League in 2016.

More practical experience has come in the past 18 months as under-21 manager, where, as fourth seeds, he took Ireland to the top of a qualifying group containing Italy and Sweden.

“I think you tend with the international camps, you really have to be really specific with the work you do because of the days.

“It helps on occasion to set up the second 11 in the shape that the opposition play in because there are such contrasting styles.

“Some teams press high and a lot of teams sit deeper, tactically completely different. Some teams play with left and right side in an unconventional way, a different shape on the left to the right.

“France as World Cup winners, for example, with Mbappé high on the right and Matuidi as a left-sided player tucked in. There are more sophisticated examples, but that’s one obvious example.

“Tactically, you have to adapt. Sometimes, the opportunity to do that on the training ground, you have to be very specific and the players then are very aware of what is expected.

“There can be an element of trial and error – you see what works and doesn’t work on the training ground.

“It gives an opportunity for everyone to examine all aspects of how you’re training and how you’re playing, and that’s how I view it.”

While much excitement has been generated by the rise of Troy Parrott, Aaron Connolly and Adam Idah from the under-21s to the Premier League, Kenny pointed out the quality that is already in situ.

“I think we have a lot of quality in our senior squad also. Our back four have been very consistent, and I think the addition of John Egan into the back four changes the dynamic of the back four.

“Rather than have two, traditional number fives, that changes everything really, how you play. That gives it a great dimension, with raiding full-backs and the composition of the back four, and that gives you a great platform to go and build the rest.

“We have a lot of talented players. It’s difficult to know why, for example, three years ago, someone like Robbie Brady was probably our most creative player and now, at times, hasn’t got into the 22. How has that happened?

“My job is to try and unlock the potential of the whole team and find the best way of doing that. That’s how I see my job.

“I’m really excited about it, and hugely honoured to be given the opportunity to do that. It is the ultimate honour that you could have, and it’s a huge privilege.”