Alan Reynolds: You could say that I resigned, but basically I was sacked and rightly so 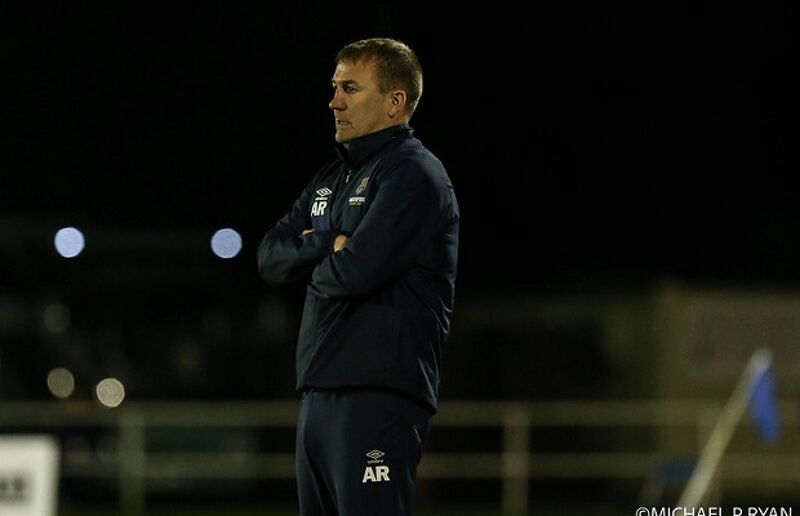 A no-nonsense midfielder during his playing days, Waterford boss Alan Reynolds was initially thrown in the managerial deep end at 29 as a player/manager for his hometown club. Learning from this daunting task and following various coaching spells, Reynolds returned to the Blues' hotseat in 2017 more prepared for what lied ahead.

In addition to three playing stints at the RSC, Alan also turned out for Longford Town, Cork City, Shamrock Rovers (twice) and Shelbourne. His tenacious style of play ensured plenty of vocal opinions from opposition supporters, but attracted the attention of many a League of Ireland manager.

"I never tried to change the way I played. If someone signed me it was because of the type of player I was and to be effective in that way. Being physical was my game and in the heat of the battle you needed to be. Clubs kept signing me, so obviously I was doing something right."

Taking over as Waterford United player/manager in 2004, Reynolds found it difficult to give his utmost in either capacity without causing detriment to the other: "I was playing week in, week out and at 29, I was too young anyway. You're coming in at half-time and it's hard to get a proper view of the game when you're in the thick of it. If your form wasn't good and you were taking yourself off, you couldn't see how you were affecting the team. I had good staff with me, who took on a lot of responsibility when I played, but it was very difficult."

Despite this taxing juggling act, the rookie manager led the Suirsiders to that year's FAI Cup final, where a lead with four minutes to go was turned on its head by a never-say-die Longford outfit: "We thought we were very close, but it just wasn't meant to be on the day. It was our first time getting there, but not Longford's. Maybe that little bit more experience than ourselves told in the end."

After that relatively successful maiden season in charge, Alan was seen as relinquishing the managerial reins come the following March: "You could say that I resigned, but basically I was sacked and rightly so. I was never ready at that stage. The first year I was lucky with the players I had. When you're winning games it's easy, but when you're losing it's not. I had no experience to fall back on, but it was a great learning exercise. The board had to make a decision and I agreed with them."

Finishing up his playing career at Shamrock Rovers in 2007, the Waterford native picked up invaluable coaching exposure at Derry City, St Patrick's Athletic and Cork. By the time Lee Power took control of Waterford in late 2016, Reynolds, aided by newly-appointed Director of Football Pat Fenlon and a generous playing budget, was the ideal candidate to guide his hometown club back to the Premier Division subsequent to a decade-long hiatus, which he duly delivered at the first time of asking.

"When I went in we had no players signed. The budget was decent, but the recruitment was key and that's where Pat came into his own. Having him there was a massive help in getting things started and putting structures in place. After I got sacked that first time with Waterford, I went on to play for Pat at Shels and later coached under Stephen Kenny and Liam Buckley, so I was more ready. Pat built the club up, we worked closely together by bringing in the likes of Paul Keegan, Kenny Browne and luckily enough we got out of the division."

A highly respectable fourth-place position at the end of the 2018 Premier Division campaign seemingly earned Waterford a Europa League spot for the next season's competition. However, due to the club not being in its present form for three years, as it was then, UEFA denied European football's reappearance at the RSC, with St Patrick's Athletic the fortunate recipients.

"The club had planned for this, met the FAI, they came down to see the ground and there was never a mention that we wouldn't be playing in it. We met all the standards, so when it came everyone was in shock. The supporters, staff and Lee were gutted. There were only a handful of players still around who got us there, but when this happened some of them left because they thought they'd be playing European football … That was the knock-on effect and nobody even saw it coming. We budgeted for Europe and to be told that we were being knocked back was very disappointing."