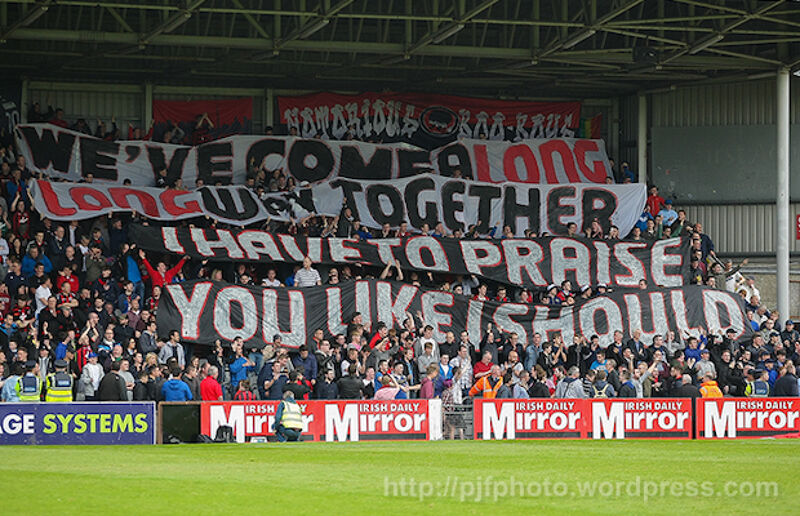 If you are stuck for a sporting fix during these times of social distancing, there is a rich catalogue of films about Irish football that might help you through the pandemic.

With no domestic football set to be played until June at the earliest, why not check out some of these excellent films that give a rich and detailed look into all levels of Irish football.

In 2015 YouTube giants Copa 90 went to Dalymount Park to do a feature on the Dublin derby between Bohemians and Shamrock Rovers. This 15 minute short film combines first hand interviews and match day footage to give detailed look at one of Ireland’s biggest games.

A documentary on the life and times of Cork City. The focus is on Europe, with the film following the club’s 1997 UEFA Intertoto Cup campaign. That year City played sides from Belgium, Germany, Israel, and Switzerland with the words and footage of John Creedon following them every step of the way.

This retelling of Dundalk’s 1979/80 European Cup campaign provides an engrossing account of one of Irish football’s most remarkable stories. Adapted from the players stories, this hour long feature shows the Lilywhites journey onto Europe’s top table, where they played Linfield, Hibernian of Malta, and Celtic.

This short film from RTÉ follows Shelbourne for a week as they prepare for the 1975 FAI Cup final against Home Farm. Unlike the Shelbourne we all know today, this is team without a major honour in 14 years and the feelings associated with such a famine are all laid bare here.

In 2004 Shelbourne made Irish football history by becoming the first Irish club to reach the play off round of the UEFA Champions League. That summer they beat clubs from Iceland and Croatia in their run to the play off against Deportivo de la Coruna. This short film from Off The Ball tells of the story of that summer in north Dublin with extraordinary detail.

The same year that Copa 90 went to Dublin, they also made the long journey south to do a feature on Cork City FC. The documentary tells powerful story of how fans group Foras saved Cork City from going out of business in 2010.

In the summer of 1998, Brian Kerr led the Republic of Ireland to the glory in the u18 European Championship. eIr Sport captured this journey excellent in their 2018 film which features a wealth of match-day footage and interviews with the stars including Brain Kerr and Richard Dunne.

This four part documentary series follows former Bohemians and Derry City manager Roddy Collins during his time at Monaghan United. Originally broadcast in 2013, this fly on the wall feature gives a full insight into life under Roddy Collins.

In 1989 Derry City created Irish football history by becoming the first club to win the domestic treble of league, FAI Cup and league cup. Their celebrations were filmed by Channel 4 and combined with a vivid retelling of the unique history of Derry City, they put together this extraordinary look into life on Foyleside in the late 1980s.

In 2006 Derry City had a memorable run in the UEFA Cup, beating sides IFK Göteborg of Sweden and Gretna F.C of Scotland before being knocked out by French giants PSG. This journey brought them right to the first round of the UEFA Cup and a game away from being the first Irish side to reach the group stages of a European competition.