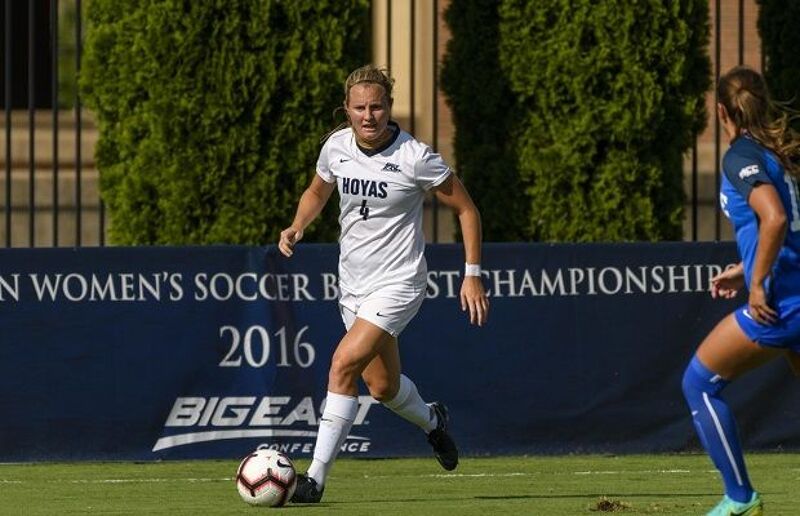 American-born striker Kyra Carusa will link up with Vera Pauw’s national team ahead of the UEFA Euro 2021 qualifiers with Greece and Montenegro after receiving FIFA clearance.

24-year-old Carusa is currently in pre-season training with Danish side HB Koge, whom she joined from Le Havre after spending with the French Division 2 club last year.

The San Diego native scored four goals in three games for Le Havre and previously was drafted by NWSL club Sky Blues FC, for whom US international Carli Lloyd lines out.

The former Georgetown University striker qualifies through her Cork and Laois-born grandparents and was first contacted by the FAI at age 16 but opted to line out for the US up to under-23 level.

She reached out to Pauw with the help of her coach at Georgetown, Irishman Dave Nolan, and the management team scouted her before issuing her first call up.

Carusa faces healthy competition in the forward positions with Leanne Kiernan, Rianna Jarrett and Amber Barrett all established at international level, while Stephanie Roche is also in reserve.

“It is incredibly humbling, not only to be considered for a call-up but to have the opportunity to represent Ireland on a global stage,” Carusa told the association’s website.

“It means the world to both my family and I. I am thankful to my grandparents and proud to play for the country my familial roots began in.

“I hope to be able to play for Ireland and help the team establish a dominance in international play like never before. I believe the players are talented enough and it is our time to showcase this.”

She added: “I first learned of interest from Ireland when I was about 16 years old. At the time, I had no sense of the process of declaring for Irish citizenship.

“As I played through college, I knew that I wanted to play at the highest national team level. In my graduate year of college, I started the process of attaining Irish citizenship.”

The Irish extended squad will meet up on February 29th before being cut down to 23 for the games against Greece, in Tallaght on Thursday, March 5th, and in Montenegro six days later.