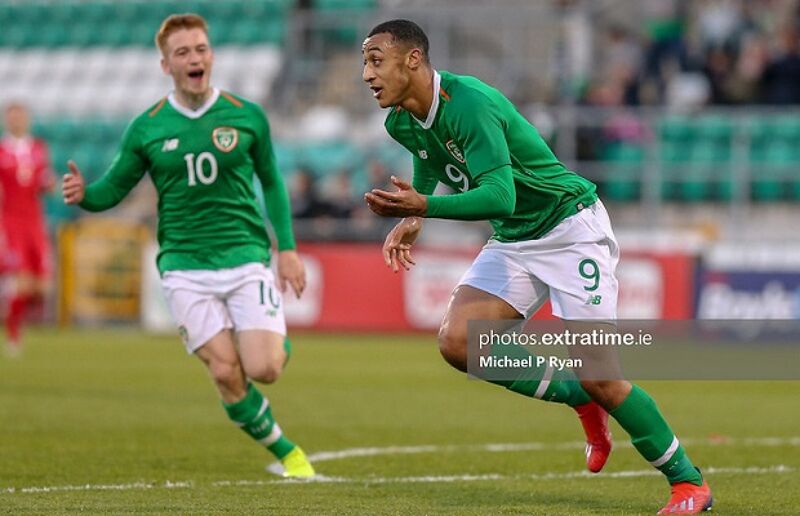 A second half masterclass from midfielder Connor Ronan and goals from Idah, Parrott, Elbouzedi and O’Connor helped Ireland to a convincing 4-1 win in front of a crowd of 2,760 at Tallaght Stadium this evening.

Sweden had the first real half chance of the game after just five minutes with Irandust rising highest to meet Larsson’s cross but the striker couldn’t direct his effort at goal with Bazunu happy to see the ball wide.

The attacking trio of Jason Knight, Parrott and Idah showed promise early on with their exchange of crisp passing in an attempt to create chances for the home side but with centre-half’s Ahmedhodzic and Hadzikadunic in no mood to concede were limited to scraps as they foraged for a breakthrough.

It was the visitors however who made the breakthrough on eighteen minutes. Lee O’Connor laboured over the ball and had it nicked off his foot by the quick thinking Ingelsson on the edge of the box.

The striker left the ball for Viktor Gyokeres who turned Nathan Collins with ease before bending his effort past Bazunu and into the net to give the visitors the lead.

Ireland were beginning to get into their groove as the game ticked towards half time and their best chance of the half fell to Adam Idah just yards from the goal line following a promising run down the left by Parrott.

Parrott showed great pace to wrestle past Beijmo and get himself into the box before finding Idah’s feet with a short pass to his right.

Idah did well with his effort connecting with the ball first time but his effort inched agonizingly wide of the post.

Minutes later and Ireland’s hard graft in trying to work the ball up the pitch was almost undone once again by sloppy play at the back. Not for the first time in the opening forty five. A sloppy pass from

The second half was just four minutes old when Ireland levelled the game with a really well taken goal from Lee O’Connor after brilliant build up on the right from Adam Idah.

Despite the chances being limited for Ireland in build up to the goal, Idah was playing the channels brilliantly; giving the two full backs a right headache in their effort to contain the Norwich striker.

A break away run from Idah down the right saw him collect Elbouzedi’s pass down the line before squaring the ball to the edge of the box for the waiting O’Connor.

The Celtic man completely unmarked had enough time to take a touch before unleashing an unstoppable effort through the swarm of bodies and into the corner of the Swedish net.

The goal injected a real shot of confidence into the Ireland side and the half time introduction of Scales and Ronan seemed to really settle Kenny’s side down as they went in search of their second.

A perfectly timed cross into the box from Elbouzedi on the right found Adam Idah yards from the goal line but the striker just couldn’t find enough to beat Dahlberg in the Swedish goal.

Elbouzedi was finding a serious amount of space down the right in the second half and found Idah once again with an identical cross to his first a minute or two earlier to the edge of the box for the Norwich man.

Idah made no mistake this time taking his time before unleashing a low drive past Dahlberg to give Ireland the lead for the first time on the night and a deserved goal for Idah.

Two became three very quickly for Ireland with the patient Troy Parrott getting his goal. A sublime ball over the top from the impressive Connor Ronan in midfield to the feet of Parrott left the Spurs man to turn Ahmedhodzic inside before calmly dispatching his shot into the far corner to extend Ireland’s lead. 3-1 to the hosts.

The half time introduction of midfielder Connor Ronan changed the game for Stephen Kenny’s side and he picked up his second assist in just forty five minutes battling his way into space on the edge of the box.

He then squared the ball to the unmarked Elbouzedi to pass the ball into the net giving Ireland a convincing 4-1 win in the end on a really cold night in Tallaght Stadium.

Extratime.ie Man of the Match: Adam Idah (Republic of Ireland).