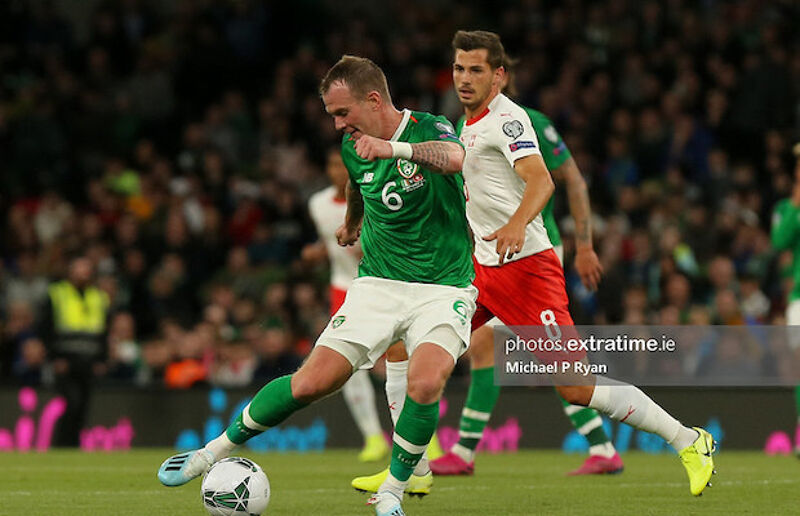 It is a second chance that Glenn Whelan thought he would never get. The midfielder could pick up his 91st international cap on Monday – joining Niall Quinn in eighth place on the all-time Ireland appearance list.

More importantly though he is one game away from the European Championship - a tournament set to be part-hosted in his home town.

It is quite the turnaround for the player who was effectively retired from international duty against his wishes by Martin O’Neill.

“For me to get a second bite of cherry, for it to come back around, it is great,” said Whelan. “It was taken away from me and I was never going to play for my country again. But please God get if I get picked tomorrow, I can play in possibly the biggest games that Ireland have played in.

"I’m going to cherish it and take it on board. Although it is nerve wracking, hopefully I’m going to enjoy it as much as I can.”

Whelan isn’t fazed by the pressure that comes with this crunch game against Denmark – a match the Republic of Ireland must win to secure automatic qualification for EURO 2020.

“This is what we want, this is why we are here. This is why you rock up for the friendlies when you could be on a beach having four or five days off. This is why you play for your country to play in these games. There are kids out there dreaming of playing for Ireland.”

The 35-year-old was speaking at the pre-match press conference sitting beside Shane Duffy who is set to captain the Boys in Green in the Aviva with Seamus Coleman suspended.

“It is a bit different for me as I’m that bit older than Shane,” said Whelan. “It could be the last big night for me so I’m going to cherish it.

“With Seamus not being around, he deserves it more than anyone with his performances. Even if he didn’t have the armband on tomorrow night, he is a captain anyway as he goes out, puts a shift in and is a real warrior. I’m delighted for him.

Shane Duffy to captain the Boys in Green https://t.co/EluFiZPgFX pic.twitter.com/j44FpAFyzl

“It is a chance of qualifying for the euros. Everyone dreams of that. We are one game away. It is great for us because I’m sure after the Nations League, no one gave us a chance.

"To be here, it is a cup final that we want to win and progress. We are at home and we need to go out there with real passion and a real fight to try and qualify.

“We need to go and give our fans something to shout about and get them behind us. This is where we want to be. This is why we show up on nights like this. Everyone wants to play for Ireland and play in a tournament.”

Mick McCarthy: 'The crowd are hoping we play well, that we give them a performance and that we win. They will support us more if we play well and win. They will enjoy that more. It is what we want to produce for them.'https://t.co/quULCTMX4k pic.twitter.com/8u0AJKweMT