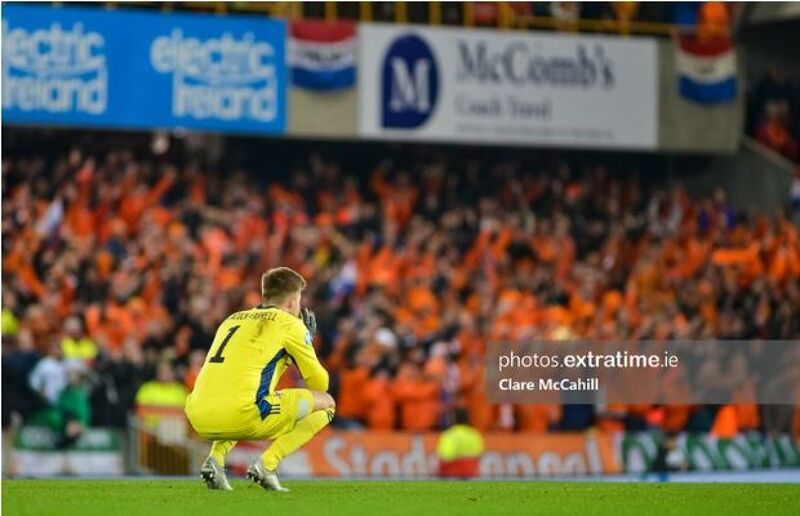 In what is set to be Michael O’Neill’s final home game, Northern Ireland played out a spiriting 0 - 0 draw with the Netherlands in front of 18,404 at Windsor Park.

The first half began with some controlled Dutch possession football. However, after only four minutes Jasper Cillessen took too much time, being closed down inside his own 6-yard box by Corry Evans.

Evans was very unlucky not to see his effort find the net, the Blackburn Rovers midfield tried to scoop the ball back towards the onrushing Josh Magennis, but Virgil van Dijk was on hand to clear.

If the home crowd didn’t need much encouragement to get behind their team, Windsor Park was rocking now.

Just three minutes later Magennis saw his glancing header just whistle past the far post from a cross from Patrick McNair before George Saville saw his effort blocked by Matthijs de Ligt after a poor punch from Cillessen.

In the 10th minute, the Dutch exerted some of their own pressure. Quincy Promes’ dazzling footwork saw him glide past Stuart Dallas before his low cross was directed onto the bar from a combination of Marten de Roon and a couple of Northern Irish defenders.

The Netherlands took control after the hectic opening ten minutes. They began to pass the ball well as Ryan Babel and Promes provided runs in behind as Frenkie de Jong and de Roon looked for the switch of play.

Gavin Whyte looked bright down the right-hand-side for Michael O’Neill’s side providing Daley Blind with some food for thought with his neat dribbling and runs off the ball.

On the half hour mark, A beautiful out swinging cross from the right from McNair evaded everybody until Joel Veltman came running in on the back post where he could only divert the ball onto his hand. Referee Szymon Marciniak had no issue in awarding a penalty to the delight of the home crowd.

On the night he became the most capped midfielder ever to come from the British Isles, captain Steven Davis stood up on his 116th cap to take the penalty but blazed it high well over Cillessen’s crossbar.

The last 15 minutes of the half was played on Dutch terms, with Blind, Babel and Promes all going close without really testing Bailey Peacock-Farrell in the Green and White Army’s goal.

The Netherlands dominated the ball in the second half, Davy Pröpper and Frenkie de Jong controlled things in the middle of the park as the North dropped off and remained compact.

Due to how deep the Northern Ireland back four were playing, there was no space for Babel, Promes and Donny van de Beek to run in behind.

It took until the 67th minute for the Dutch to get in behind after a great pass from de Jong set Blind in down the left. His first time cross was brilliantly intercepted at the near post by Craig Cathcart.

Niall McGinn and Jordan Thompson were brought on as the North looked to turn the tide and get their own foothold in the game but were unable to do so.

As the game ticked towards full-time, Ronald Koeman’s men seemed happy with the point in Belfast, even bringing on a centre-half Nathan Aké for Babel in the final minute of normal time.

The Northern Ireland performance was typical to what we have come to see under Michael O’Neill. Hard work, no space between the lines to allow the opposition to play in and a willingness to play the ball on the ground d when possible are the hallmarks of a Michael O’Neill side.

Next on the horizon is a tough trip to Frankfurt to take on Germany in a game which means little for both sides, rather an opportunity to blood players and give those who need it some game time.

The Netherlands will be delighted with qualifying for a major tournament for the first time since the 2014 World Cup in Brazil.