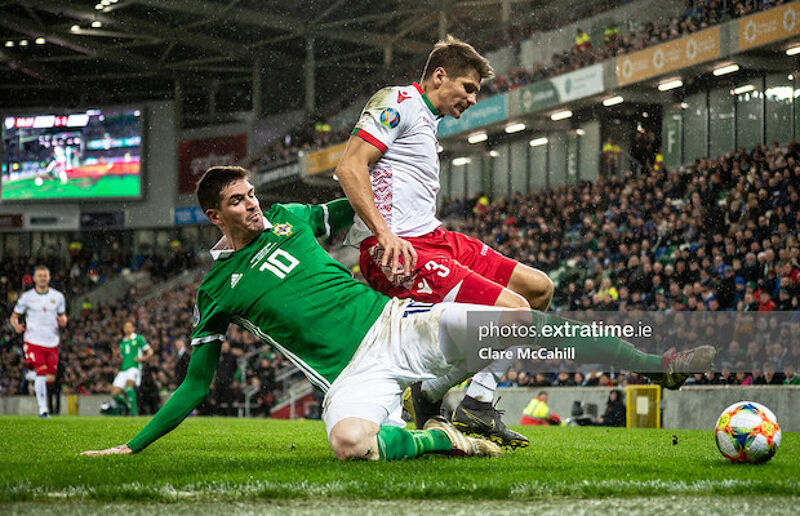 NORTHERN IRELAND
The Michael O’Neill managerial era with Northern Ireland is coming to an end but he will continue to double job with his international side and with Stoke City through to next year as he attempts to qualify his country for Euro 2020.

Saturday’s game against the Netherlands at the National Football Stadium at Windsor Park could be his final home game (kick off 19:45). Two wins are required against the stiffest of opposition for a chance of automatic qualification – with victories required over the Dutch this weekend and a win over Germany in Frankfurt next Tuesday.

However, results elsewhere have gone O’Neill’s way and Sweden’s win over Romania on Friday has given Norn Iron a UEFA Nations League playoff back door route to qualification – despite losing all four of the Nations League games. That match will be in March and he has agreement with his new club side that he will be available for manage the 'Green and White Army' for the playoffs.

After a slow start to his international managerial career following his departure from Shamrock Rovers, O’Neill shaped his squad to qualify Norn Iron for their first major tournament in 30 years – making it to the last 16 at Euro 2016.

They were a disputed penalty away from making the World Cup in Russia – losing out in the playoff to Switzerland and O’Neill will leave Northern Ireland in a much more positive position then when he first stepped into the dugout.

"I hope people will judge the tenure that I’ve had over the eight years and hopefully we see that Northern Ireland is in a better place,” said O’Neill on the eve of Saturday’s game. “There has been good loyalty from the association.  A lot of loyalty and support has put us in a place now where the team can continue to grow and get stronger."

O’Neill’s captain Steven Davis, who is set to earn his 116th cap this evening, spoke about the impact of his manager.

"I don’t really think you can put into words,” said the Rangers player. “He’s done so much for football in this country and there are a lot of things you don’t see that have gone on behind the scenes to try and improve the structure of grassroots football.

"The belief that we’ve got now as a group that we can go and compete to go major tournaments is huge and I’ve always had a really close relationship with Michael and we bounce a lot of ideas off each other. He’s been huge and I can’t speak highly enough of him."

O'Neill has at least have a pretty much full strength squad to choose from. "The belief in the group is strong,” said the new Stoke City boss. “They know they’ve got a very difficult task … but they are going to do everything possible to make sure that when we go to Frankfurt on Tuesday that we’ve got something to play for."

NETHERLANDS
The Dutch come to Belfast knowing a draw is good enough for them to book a berth at next summer’s finals – their first qualification in three major championships having missed out on the World Cup in Russia and the France.

Ronald Koeman's side have lost just the one qualifier in this campaign so far, a 3-2 defeat to Germany in Amsterdam. The Dutch have been prolific in front of goal, scoring 19 goals in their six games to date, including beating Germany 4-2 in an impressive win in Hamburg. They have also conceded just two goals against teams other than Germany in the group.

They did concede to Northern Ireland but were able to turn around that match to win 3-1 last month with three goals in the last ten minutes of that match. Koeman was critical of the style of play and what he saw as Northern Ireland’s time wasting tactics when they led in Rotterdam.

"We expect a more attacking team tomorrow and we need to be prepared for that," said Koeman in the build up to Saturday’s match in Belfast.

The Dutch manager has a couple of doubts with Georginio Wijnaldum and Memphis Depay, who has scored six goals in this campaign, potentially missing out on a chance to get their team’s over the line.

The Netherlands captain Virgil van Dijk spoke about his dream of making it to the Euros. "It is a dream for any player to perform at a major tournament,” said the Liverpool player.

“Obviously I missed two which were very disappointing at the time, but I look forward to what is coming. I want to make sure we qualify [on Saturday] and we will do everything possible to do that. And then it will be a dream come true.”

Germany will be keeping an eye on events in Belfast as if Joachim Low’s men can better the Northern Ireland result in their game in Belarus they will wrap up qualification ahead of next Tuesday’s night’s clash against Northern Ireland.

MATCH STATS
Northern Ireland have gone 20 matches at home without a draw, winning 14 and keeping 11 clean sheets. Their last draw was against Hungary in September 2015.

Northern Ireland have only failed to score in one of their last nine internationals.


Northern Ireland
Injured: None.
Doubtful: None.
Suspended: None.

extratime.ie reporter Macdara Ferris and photographer Clare McCahill will be in Windsor Park this evening to bring you all the action.