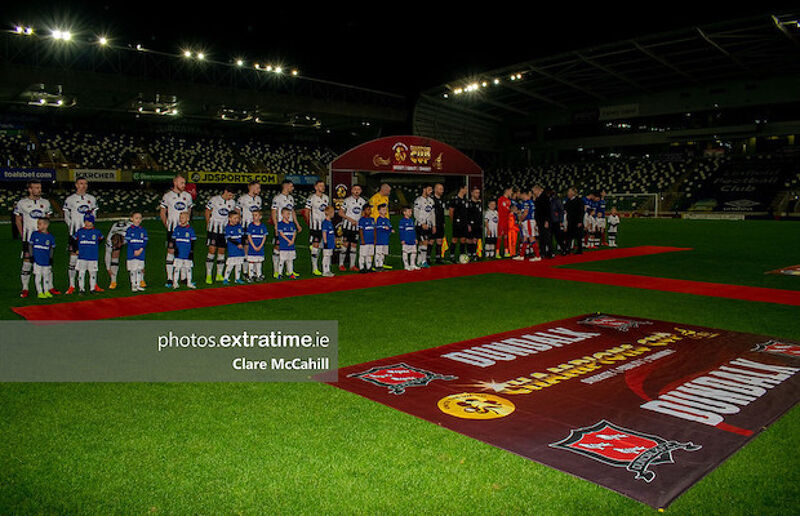 After Linfield and Dundalk played out an entertaining 1-1 draw in Belfast on Friday, Oriel Park will hold the answers next Monday as to who will claim the first Unite the Champions Cup trophy and pocket the €50,000 prize money on offer.

It came after a good through ball from Jamie Mulgrew which allowed Lavery to shimmy by Sean Hoare, before stroking the ball calmly into the far corner of the net past Gary Rogers.

Windsor Park is designed for atmosphere and even though there were many empty seats, the roar from the home supporters was deafening when the Blues went 1-0 up early on.

Dundalk continued with their usual passing style, but Linfield look comfortable - the spaces between the lines were few and far between as the Lilywhites couldn’t get the ball into pockets between the midfield and back four.

Joel Cooper down the Linfield left was causing problems with his pace and dribbling while Lavery ran the channels causing Dundalk central defensive pair Hoare and Andy Boyle difficulties.

With just two minutes before the break Cooper could and perhaps should have put doubled the Blues lead. Cooper’s strike was low and hard but it just went past Gary Rogers near-hand post when he really should have scored.

The second half started with Dundalk passing with more sharpness, trying to up the tempo and move the Blues out of their shape.

It only took seven minutes for Hoban to release Dan Kelly after a pass from the far touchline. Kelly composed himself well before slotting low past Gareth Deane in the Linfield goal for the equaliser.

Dan Kelly looked now began to look bright and linked up well with Cameron Dummigan well down the right, with the Ringsend winger whipping a cross which just grazed the head of poacher Patrick Hoban.

Dundalk enjoyed more dangerous possession in the second half as they pressed for the winner on the night. Linfield’s best opportunities came through playing direct balls into the channels for Lavery and Cooper to run on to.

Set pieces looked to be where the Blues seemed set to capitalise on. Kirk Millar fired a free kick in towards the near post after a foul on Lavery by Hoare.  Jamie McGrath headed away well as the crescendo of home support began to rise.

The last 20 minutes were littered with substitutions as the game began to peter out. Michael Duffy was largely anonymous until his blistering run was stopped by Mark Stafford in the 90th minute.

Sean Gannon looked solid at right-back after replacing Dummigan, while Andrew Waterworth struggled to get into the game for the home side after he replaced flying winger Cooper.

Georgie Kelly nearly had an opportunity to score from eight yards out, but he was blocked well by Jimmy Callacher. However, both sides seem to be content with a draw which sets it up well for Oriel Park on Monday night.