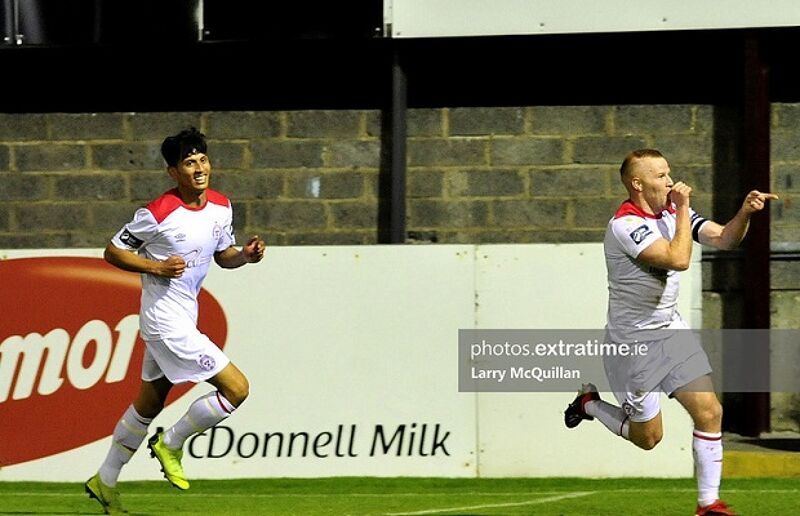 The Drogheda native asserted himself as one of the key cogs in Ian Morris’ title-winning side – with a number of vital performances.

Making 26 appearances and scoring five goals, Brennan was often the creative spark of the Drumcondra outfit’s triumphant title winning side – an asset that certainly proved valuable as the season progressed.

After a year of playing second fiddle to Shane Supple at Bohemians, Colin McCabe made the move to Shelbourne from the Gypsies in order to get valuable first-team experience, and that he did.

Initially seen as the number two to Dean Delany, McCabe soon stepped out of the shadows of Delany, where he played a key role in the Reds title success.

Making 21 league appearances for Shels and registering an impressive 12 clean sheets – McCabe has since established himself as one of the young goalkeepers to watch out for in the 2020 campaign.

One of their most high-profile new signings during last season’s transfer window Luke Byrne proved to be a major part of a watertight Shels rear-guard in 2019.

They say defences win you league titles, and that was certainly no different in the 2019 First Division – with Byrne’s contributions in the centre of defence proving to be vital.

The former Bohemians and Shamrock Rovers star brought a calmness and maturity to an already strong backline, despite playing in what many thought was a position not suited to his strengths at the start of the season.

What we expected they would do: Champions

The Extratime.ie team predicted the Reds to end their tortuous spell in the First Division in 2019, as the Reds were installed as early pre-season title favourites.

Despite not looking overly convincing in many games, the Reds found a way to win games that their title rivals were unable to find – which helped them on their way significantly.

The wins over Longford Town, Bray Wanderers and Drogheda United prior to the mid-season break proved to be a launchpad for their later months of the season – a run that saw the Reds only drop points in two more games as the season ground to a halt.

The win away to Drogheda on the penultimate night of the season will most certainly take much of the acclaim, but it was their mid to late season form that proved key.

With 60 points to their name in the end, and a nine point gap between themselves and Drogheda in second – history may suggest it was a comfortable title-win – but it was far from it.

Shelbourne bowed out of the FAI Cup after a first-round defeat away to Northside rivals Bohemians at Dalymount Park in arguably the cruellest circumstances.

Leading by two goals with just nine minutes remaining – Jaze Kabia’s bizarre red card set in motion a crazy few minutes that left the Reds in a state of shock.

Goals from Keith Buckley and Danny Grant levelled the tie for the Gypsies who appeared all but out of the competition minutes earlier – before Daniel Mandroiu popped with a late, late winner to break Shels hearts.

After seeing off the challenge of non-league Bluebell United in the first-round thanks to a Daniel McKenna strike, the Reds hosted UCD at Tolka Park in the second round of the league cup.

After taking the lead through Derek Prendergast early on, the Students struck back through winger Neil Farrugia on the half-hour mark.

Timmy Molloy then popped up with a last-gasp strike to send the then Collie O’Neill side through – as Shels bowed out of the EA Sports Cup at just the second hurdle.

The Gypsies easily brushed aside the challenge of Ian Morris’ side – running out 4-1 winners. Bohemians have since opted out of the tournament – with the final due to take on place on Wednesday evening at Richmond Park.

Shelbourne appeared to have found a knack of winning games that they were perhaps lucky to during the 2019 campaign.

Despite not appearing to be in total control of games, Shelbourne generally found themselves come out on the right side of results.

Already, it is clear that plans for their return to the top-flight are well underway. Jack Brady from Limerick and Aaron Dobbs from Longford Town have both signed along with a whole host of re-signings from last year’s squad.

Managing to keep a young, yet experienced squad will be an asset for Morris, but the former Bohemians star will be acutely aware that more will need to be acquired in order to stay competitive in next season’s top-flight.

Karl Sheppard has joined the club from Cork City in a move that has brought plenty of optimism to the Richmond Road venue.

The Premier Division will have its own challenges, but rest assured, Shelbourne look primed have an extended period of time back in the top-flight.