We need to talk about Alan 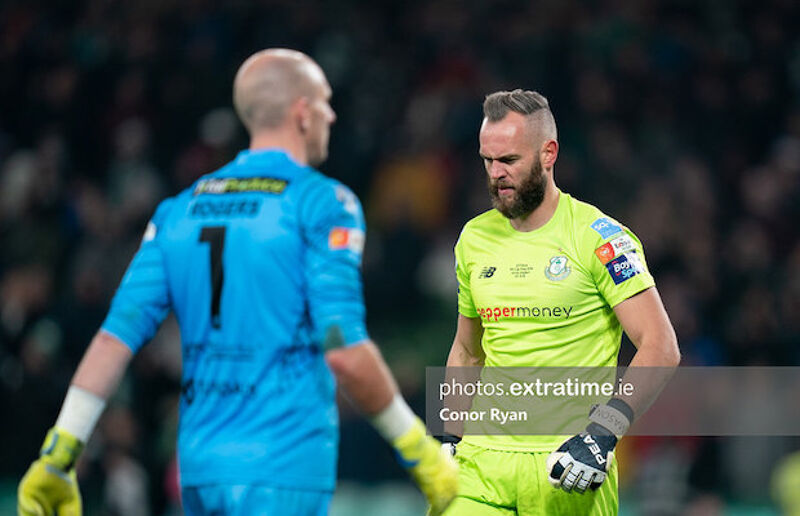 We are going to go against the general grain here and say we should be talking about Alan Mannus. There is a place to discuss his actions during the FAI Cup Final, the showpiece event of the League of Ireland calendar.

33,111 people looked on from their seats in the Aviva Stadium and countless numbers worldwide as the Canadian born former Northern Irish international showed no respect...to Dundalk’s attempt to achieve the first domestic treble in League of Ireland football in 30 years.

As has been the story of both his periods with the Hoops, he was unflappable throughout the 120 minutes - including a remarkable fingertip save to deny the usually lethal super sub Georgie Kelly a late winner for Dundalk deep in extra time.

While much will be written about his penalty stop in the shoot-out from former Rovers trialist Daniel Cleary, the truth is that the 37 year old brings so much more to the Hoops defence than stopping penalties - though he did manage also to do that three times during the season.

Much like his 38 year old counterpart in Gary Rogers who was manning the opposite goal on Sunday, and who similarly made an outstanding reflex stop to deny Graham Burke a goal, Mannus exudes a presence in his penalty area and provides his defenders with an air of confidence which comes with experience.

It’s no coincidence that eight of the last ten goalkeepers to win the FAI Cup have been aged 30 or older when picking up the trophy - Darren Quigley of Sporting Fingal and Brendan Clarke from St Patrick’s Athletic the only outliers.

With the exception of James Talbot, the most prominent goalkeepers in title challenging Premier Division sides of late have been over 30. Peter Cherrie, Mark McNulty and Shane Supple all received deserved praise in recent seasons despite leaving their 20s behind - adding weight to the argument that goalkeepers get better with age.

Clearly there is more to goalkeeping than clean sheets but, with InStat ranking them both in the top three keepers in the league - Rogers first, Talbot second and Mannus third - it’s clear they’re performing at the top level.

Drilling deeper into the statistics and both netminders post podium finishes in terms of save percentages with Talbot’s 83% just pipping the 82% posted by Rogers with Mannus third on 79%. Stephen Bradley spoke in the media this week about Mannus having to reshape his playing style to fit in with the passing framework which Rovers have used this season.

Once more, the Northern Irishman is near the top of the pile with a passing accuracy of 88% only pipped by his Dundalk counterpart’s 89%, though Mannus has the lowest average in the league of long passes per game.

Having burst onto the League of Ireland scene a decade ago this summer, Mannus began his Shamrock Rovers career in a 2-2 draw at home to Dundalk with his current manager as a teammate in central midfield, having sat beside him on the bench a week previous in a 1-0 reverse to Drogheda.

The 'keeper became a firm fans' favourite at the club, from whom he joined following four league wins at Linfield. He won his fifth league title at the age of 28 as Shamrock Rovers clinched the 2010 league under the stewardship of Michael O’Neill with his goalkeeper winning Goalkeeper of the Year and only losing out to Tipperary's Richie Ryan in the Player of the Year Award.

That season ended with defeat on penalties in the FAI Cup Final with Stephen Bradley sent off - their second FAI Cup Final would prove to be equally as climactic, however on Sunday the 32 year drought in the cup for the Hoops was finally ended.

However, before his departure in the summer of 2011, Mannus won his first piece of silverware – winning the Setanta Sports Cup against Dundalk alongside Ronan Finn who captained the side at the Aviva Stadium on Sunday, with late substitute Greg Bolger in the Dundalk midfield.

As mentioned, he left the club to avail of the opportunity to play in the Scottish Premier Division with St Johnstone. However, before he left he saved a penalty in his final home game - a European tie against Flora Tallinn.

He signed off for the club with a second clean sheet against the Estonians which helped set Rovers on their way on their pioneering odyssey through Europe culminating in the Europa League Group Stages - a feat similarly accomplished by Dundalk five years later.

Having left The Hoops well placed in both the league and Europe, Mannus arrived on Scottish shores to battle it out with former Aston Villa stopper Peter Enckelman. The ex-Linfield custodian had patience and took over the jersey halfway through the season and held onto it for a period which included a third place SPL finish for the club and European football.

Again he excelled at spotkicks, saving twice against Minsk in 2013. The following year saw the ‘keeper suffer with several injuries however he played in the 2014 Scottish Cup Final as St Johnstone lifted the trophy. He continued his impressive shootout form as the Perth based outfit won on penalties against the Swiss of Luzern in the summer of 2014.

He amassed over a hundred further league appearances before returning to Tallaght Stadium to sign for Stephen Bradley in the summer of 2018 where his experience helped Rovers to an FAI Cup semi final and six clean sheets in his eleven league games saw the Hoops pick up 25 points to finish the season in third position.

This season he went one better with 21 clean sheets, second in the league and a 32 year wait for FAI Cup silverware ended. Alan Mannus stood tall, defied De Town and denied a treble.

That’s how to speak about Alan Mannus - his career, reputation and penalty saving prowess deserves it.

Gary O'Neill 'To be sitting here in the Aviva having played 120 minutes and scoring the winning penalty, it is stuff that you can only dream of'https://t.co/ZWn7xgZLFp pic.twitter.com/DURZjPSyGw