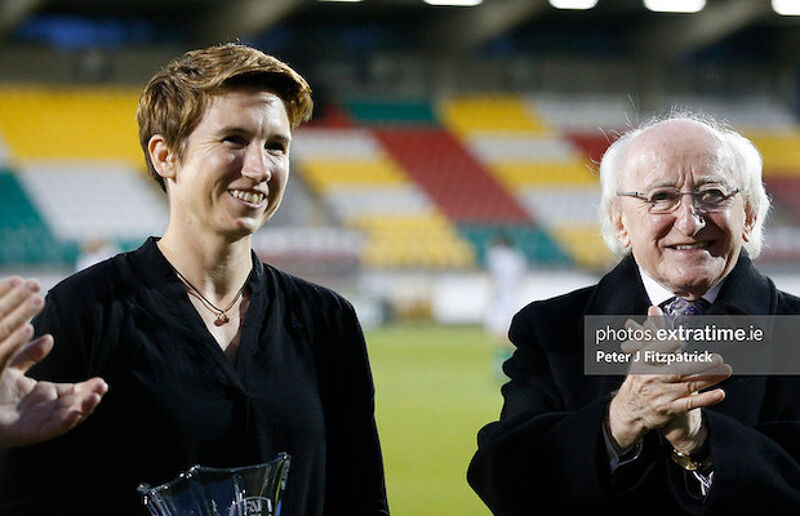 Linfield and Dundalk will face each other next month in the two-legged play-off for the new Unite the Union Champions Cup with an all-female officiating team in charge of the second leg.

The first leg will be at the National Football Stadium at Windsor Park on 8 November with the second set for Oriel Park three days later.  That second game will be refereed by the same female match officials who supervised the women’s World Cup final and the UEFA Super Cup decider in Baku between Chelsea and Liverpool.

Frence referee Stephanie Frappart with be joined by her compatriot Manuela Nicolasai as assistant referee on one side with Irishwoman Michelle O’Neill running the other line.

Dubliner Paula Brady rounds out the refereeing team as she will be the fourth official. That quartet will arrive in Dundalk just days after officiating at the sold out Wembley friendly between England’s women team and Germany.

Unite the Union Champions Cup is the first stab at a competition involving clubs from the two top tier leagues on this island since the demise of the Setanta Sports Cup which was last won when Sligo Rovers beat the Lilywhites in the 2014 final.

Dundalk have just been crowned SSE Airtricity league champions again while Linfield’s bid to retain their Danske Bank Premiership title sees the Belfast side currently sitting in fourth place, eight points behind leaders Crusaders, but with three games in hand.

A payment pot of €50,000 will go to the winners of the new trophy while the runners-up will bag €25,000. Trade union Unite, who have signed a three year deal to sponsor the competition, will also advance €25,000 towards community-based projects in the competing teams' local areas.

"Everyone in Unite is excited with the prospect of the Champions Cup. Football is something that is in the veins of working class people, of their communities; it cuts across divides and brings people together," said Unite the Union Regional Secretary Jackie Pollock.

Northern Ireland goalkeeping legend Pat Jennings will act as an ambassador to the competition. "We had our sectarian problems in Ireland but hopefully we can keep bringing communities together and the Unite the Union Champions Cup can play a small part in that,” said the former Arsenal and Tottenham keeper.

“Hopefully this tournament will last and we can get rid of some of the hatred we see today in football. There's no room for racism or sectarianism. Hopefully these Cup games will unite people.”

“(It’s) a great initiative and especially with the talk of maybe, one day an all-island league. I have a fondness for the league up here, living in Bangor; I watch the Northern Ireland league more than any other because it’s on my doorstep. I was here the night Linfield played Qarabag and they were excellent that night.”