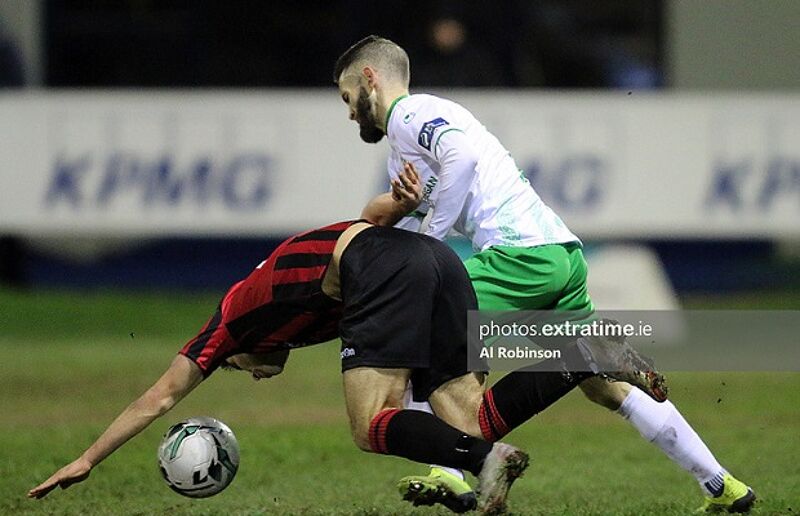 Ten-man Cabinteely held firm against Longford Town in the first-leg of their First Division Playoff with a scoreless draw.

Kevin Knight was dismissed late on with a poor challenge on Michael McDonnell – as both sides will feel as if they have a real chance ahead of next week’s second leg in the Midlands.

In the playoffs for the first time in their brief League of Ireland history – Cabinteely made eight changes from their most recent league win over Wexford at Ferrycarrig Park, with Rob Manley returning to the starting XI for the Green and Whites.

Longford on the other hand, who were in the First Division Playoffs for the first time since 2013 made three alterations themselves from their win away to Cobh Ramblers – as Sam Verdon made his return to the fold after missing out on the win over the Rams.

Despite having a raft of key players out missing, the visitors started very well, with Adam Evans and Jack Doherty causing all sorts of issues for the hosts back four.

Dylan Grimes’ corner-kick was then just about turned away from goal, with confusion reigning supreme as certain sections of the ground believed the ball hit the back of the net, but referee Alan Carey was unmoved.

Grimes and Aaron Dobbs soon saw shots just go wide – before the hosts fashioned an opening of their own, with nobody able to turn home Kieran ‘Marty’ Waters cross into the box.

Longford Town captain Dean Zambra saw his cross from the left-flank met by a header from Sam Verdon, but he could only direct the ball at the Cabinteely shot-stopper.

Arguably the chance of the half came hallway through the opening period. Dobbs was fed in by a lovely through ball by Evans, but he could only shoot straight at Stephen McGuinness with a weak enough effort.

After a slow start, Cabinteely began to fight back as the half wore on, with Keith Dalton breaking the visitor’s line for the first time – forcing Lee Steacy into a fine save with his feet as Daire Doyle’s side hung on.

Cabo continued to press, but they were unable to turn their territory into chances, with both teams going in at the break scoreless – an outcome that both would have taken at the start of the game

In a second half that took its time in coming to life, Longford fashioned the first chance of the half, with Dobbs going close – but the former Drogheda netminder was on hand to avert the danger.

However, Cabo rallied and should have really tested Steacy in the Longford goal, but they were unable to score via the head of sub Yuta Sasaki – who could not get on the end of ‘Marty’ Waters’ inch-perfect cross.

Winger Paul Fox then saw a goal ruled out for offside – as he turned home a brilliant ball from the right by Eoin Massey as the assistant waved his flag despite looking onside.

The remaining quarter of the game was a naturally tense affair, with neither side willing to push forward in fear of conceding on the counter-attack.

Former Longford Town full-back Kevin Knight was then dismissed with just under five minutes of normal time to play – with a poor tackle on McDonnell going punished by referee Carey.

However, both teams will be pleased with the result, with the second leg well and truly set up for a dramatic showdown at City Calling Stadium next week.