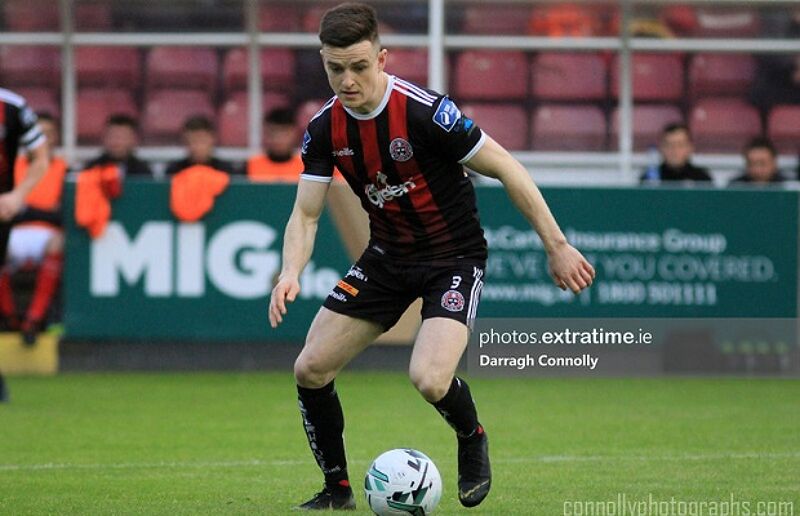 Bohemians manager Keith Long fears Darragh Leahy will miss the remainder of Bohemians’ push for a Europa League spot after returning from international duty with an ankle injury.

The left-back hasn’t played since completing 90 minutes in Ireland under-21s’ 3-1 victory over Sweden in Kalmar earlier this month.

The Gypsies were beaten 2-0 by Shamrock Rovers in the semi-final on Friday night in a game that saw Danny Mandroiu, Keith Buckley and Conor Levingston play through the pain barrier.

Dinny Corcoran has returned to light training and may play some part before the end of the season, but Kevin Devaney and Cristian Magerusan are struggling with injury.

Paddy Kirk proved an able deputy for Leahy against Rovers, pulling off a brilliant goalline clearance to deny Graham Burke, but Leahy’s absence will be keenly felt over the coming weeks.

“Darragh Leahy is gone for the rest of the season we think,” Long told extratime.ie.

“He’s come back injured from the 21s, which is disappointing. He’s in a boot. Hopefully that’s me being pessimistic rather than optimistic, but we’re looking at a minimum of four weeks, certainly.

"We lost Andy Lyons [against Derry]. Mandroiu, it was his first game in two weeks tonight. Keith Buckley first game in a month tonight. We’re missing one or two others – Kevin Devaney, Dinny Corcoran we’ve missed badly for the last couple of months as well.

"We can look at the long injury list and offer that up as an excuse but ultimately, tonight, we haven’t played well enough to beat Shamrock Rovers to be in a cup final."

The Gypsies are currently locked in a three-way battle with Derry City and St Patrick’s Athletic to seal a return to Europe for the first time in eight years.

That bid has been made somewhat more straightforward by the presence of Shamrock Rovers and Dundalk in the FAI Cup final, meaning fourth place is guaranteed a place in Europe.

Derry’s 4-0 win in their game in hand against Cork City on Friday lifted them above the Gypsies into third place, while Pats are just two points behind Bohs in fifth.

Both teams have still to face the Saints, while Derry travel to Dundalk next week, and Bohs at least have the advantage of three of their four games being at home.

“Listen, we’ve got four games left and we’re going to try and win every one of them. They’re all cup finals between now and the end of the season.

“We’ve got Pats away, Derry have to play Pats as well, so the run-in is going to be exciting, hopefully right to the end.

“Hopefully we can see the job through because I think we deserve it, but you only get what you deserve at the end of the season when the final table is done.”