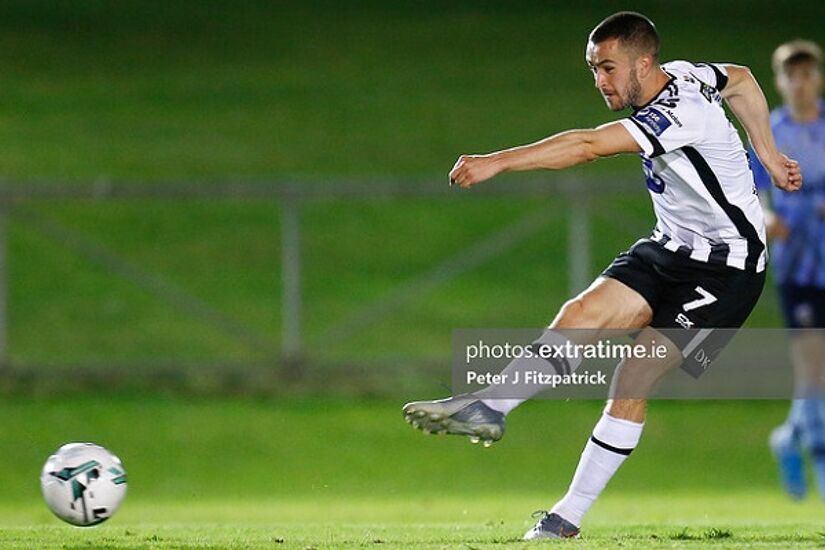 A spectacular strike from Michael Duffy – his 11th league goal of the season – helped Dundalk wrap up their 14th League of Ireland title and their fifth in six years.

The Derryman stepped up to bury an unstoppable shot into the top corner of Alan Mannus’ net moments after Aaron Greene had cut the 2-0 deficit in half.

With Rovers pushing forward in search of a leveller that would keep the title race going for another week, three quick passes from Gary Rogers, Dane Massey and Patrick McEleney put him in space.

The winger took over from there and, with Roberto Lopes backing off, he smashed a shot that left the despairing Mannus with no chance.

Headers from Sean Hoare and Robbie Benson had the home side two goals to the good at half time and close to the three points they need to retain their title.

Hoare broke the deadlock just before the half-hour as he lost defender Lee Grace to bury a free header from close range.

McEleney was the provider for the second in first-half injury time as he capped off a tidy period of possession with a pinpoint cross for Benson to glance masterfully home.

To their credit, Shamrock Rovers continued to battle and they pulled a goal back when Greene was played through by Sean Kavanagh before Duffy’s wonderstrike.

55mins Aaron Greene gets the Hoops back into this one with a well-taken goal.#RTEsoccer pic.twitter.com/P9kXKNTMFS

Rovers weren’t done quite yet and a poor pass from defence saw Hoare gift possession to Graham Burke, and he teed up McEneff to pick out the bottom corner, but the Lilywhites held out to set up a night of intense celebration.