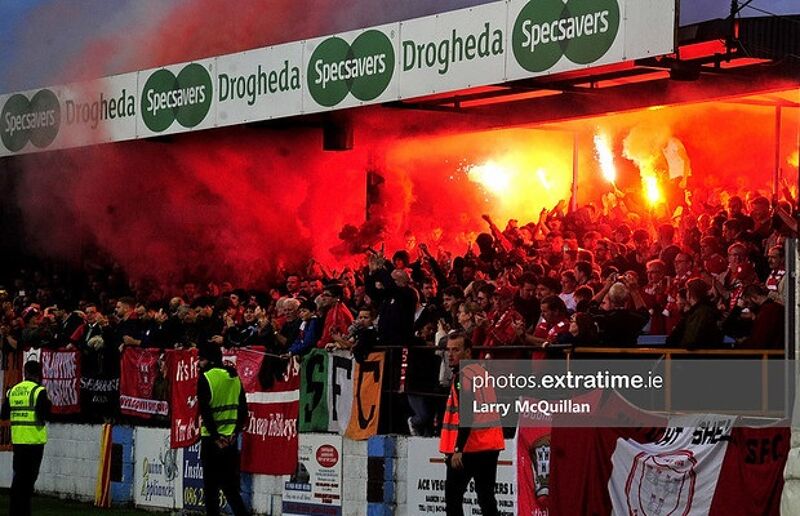 First Division Champions Shelbourne will look to make it an occasion to remember at Tolka Park on Saturday evening when they host struggling Limerick on the final night of the season (kick-off is at 7.45pm).

The Reds secured their first ever First Division crown last week with a dramatic 3-1 win away to nearest challengers Drogheda United.

Full-back Aidan Friel gave Shels the lead before the Boynesiders levelled through defender Luke McNally. However, Oscar Brennan soon struck to put Shels back into the lead minutes later.

Shelbourne made sure of the victory with seconds to go in injury time, with Lorcan Fitzgerald poking home on the counter-attack to put the gloss on a historic night for the Drumcondra club.

With all the excitement of last week still fresh in the memory, Shels boss Ian Morris is calling on the Reds support to make it an occasion to remember on Saturday night.

“The genuine thank yous you get and the tears along with the raw emotion showed what everyone felt and what this club means to people,” Morris told his club’s media team.

“It’s all about the connection with the fans and players with everyone pulling in the same direction. It’s been a fantastic season.

Saturday’s game with Limerick also sees the last of Dean Delany, who has the fourth-highest number of appearances for Shels after 11 years of total service with the Richmond Road outfit.

“He was the last person off the training pitch every day and his condition was unbelievable for a player of 39 years.

“His professionalism and the way he manages the changing room is incredible and I cannot speak highly enough of him.

“With his family and kids, he can celebrate his achievements on Saturday after an amazing 23 year career,” he concluded.

Daniel Byrne and John Ross Wilson remain out injured for Shelbourne ahead of the visit of Limerick to Tolka Park.

Tommy Barrett’s Blues will be looking to put a wretched final two months of the season behind them when they visit First Division Champions Shelbourne on Saturday.

Limerick have seen their recent form nosedive in recent weeks – a result of the consistent negativity shrouding the club during the season.

The Shannonsiders have since fallen to sixth position in the First Division table, 11 points behind fourth placed Cabinteely.

Barrett has been forced to use a large number of youngsters in recent weeks – emphasised by the fact that he could only name four players on his bench during the recent defeat away to Galway United.

To compound their recent woes on the road, Limerick have conceded a costly 12 goals in their previous five outings.

Goalkeeper Jack Brady, one of the few who has impressed at Markets Field this year, has played every minute of every league game for the Blues – racking up an impressive eight clean sheets inn very difficult circumstances for the young goalkeeper.

Jason Hughes remains Limerick’s only absentee through suspension after he was sent off for an altercation with a steward during the Blues heavy 6-2 defeat away to Sligo Rovers in the FAI Cup.

Shelbourne have won the previous two league games between the sides this season, winning one-nil at Markets Field last time out and securing a two-nil win at Tolka Park back in April.

The Reds have only fallen to defeat once in the league at home this season, and that came on their opening home game of the season against Cabinteely.

Ian Morris’ side have the best defensive record in the First Division, with only 19 goals conceded from 26 games.