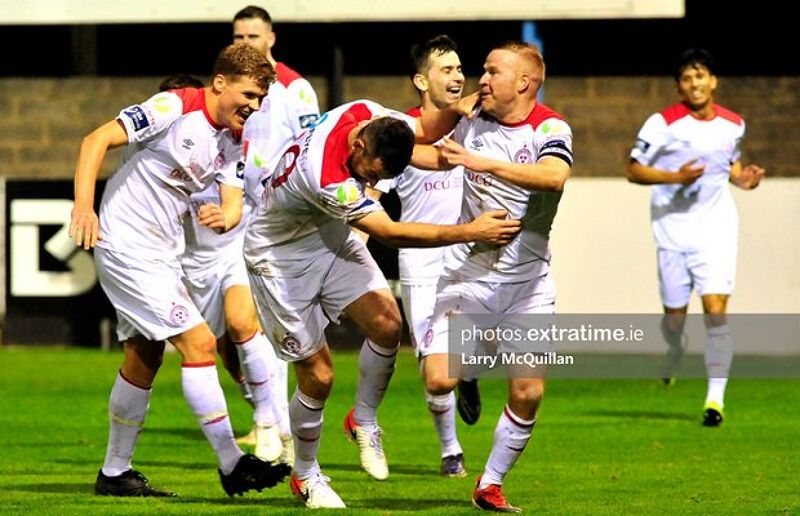 Shelbourne ended their six-year stay in the First Division on Friday night as they beat ten-man Drogheda United 3-1 to win the league title and seal promotion back to the Premier Division.

In front of a 2,596 capacity crowd, it was Shelbourne who dominated the early stages and they had the ball in the net after seven minutes.

A free had been awarded to the visitors on the right but Shels’ played on, with a cross finding the unmarked Ryan Brennan who headed past Gratzer.

The goal didn’t stand, with the free already having been awarded by referee Rob Rogers.

Shelbourne had a number of chances without testing Gratzer as Ryan Brennan fired wide from the edge of the box and Karl Moore saw his low effort deflected wide for a corner.

The first shot on target in the game came on 21 minutes as Kilduff was played in on the left but at a tight angle, he saw his shot saved by Gratzer and then cleared by a combination of a Kevin Farragher header and James Brown being fouled.

Drogheda’s first real move of the game was started by Mark Doyle as the winger held the ball up in midfield, allowing Brown to push forward from full back.

Doyle found Brown, who drove towards the box before slipping the ball into the path of Chris Lyons but his shot was blocked.

Hollywood, Lyons and Sean Brennan linked up for Drogheda next move as Brennan clipped a ball to the back post but Doyle watched as his header was deflected wide for a corner, from which Luke McNally rose highest to head narrowly wide.

Drogheda had a triple chance two minutes before the break as Lyons began the break on the left before cutting back and finding Doyle. Doyle and the rebounded effort from Meaney were both blocked before Brennan’s bouncing effort dragged wide.

Shelbourne were handed a boost ten minutes into the second half as Sean Brennan was shown a second yellow and then a red, reducing Drogheda to then men, for raising his arm as he went up to win a header. The first yellow was seemingly for dissent.

The visitors took advantage as Ryan Brennan allowed the ball to run past him and Aiden Friel fired a low drive past Gratzer in the Drogheda net, 1-0 Shelbourne.

Drogheda had at this stage brought on Luke Gallagher for full back James Brown and moved centre-half Luke McNally forward into a centre forward’s position.

Adam Wixted began a counter on the right, cut in and found Lyons who squeezed through two Shels’ challenges, found McNally who fired into the corner.

The Boynesiders pushed for an equaliser but it would be Shels who would make sure of the victory.

Shelbourne countered following a Drogheda attack, captain Lorcan Fitzgerald found himself in on goal as Gratzer tried to claim the ball, but the Shels’ man slotted in to confirm Shels’ return to the top flight of Irish football.