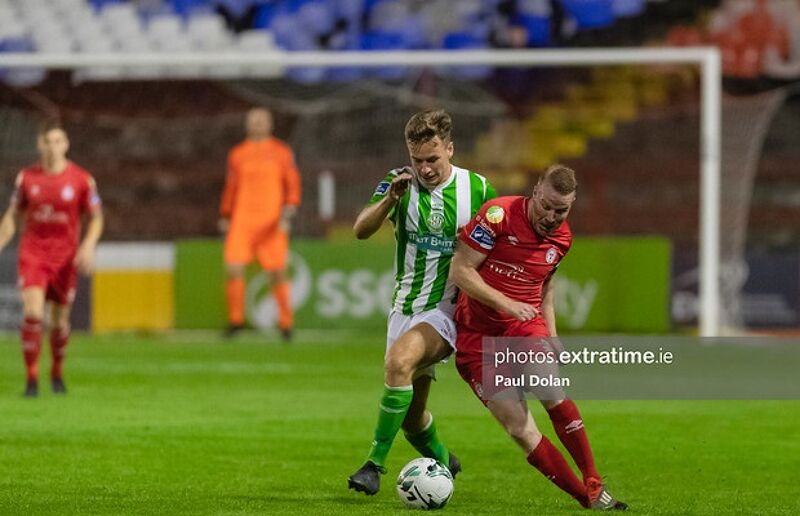 Tim Clancy’s Drogheda know that they will have it all to do if they are to go top of the First Division heading into the final week when they host league leaders Shelbourne at United Park (kick-off is at 7.45pm).

United Park is expected to be full to capacity on Friday evening, with a large travelling contingent from the capital expected to descend on the Windmill Road venue.

With plenty at stake for both sides, it would only be natural for players on both teams to be feeling the pressure – but it appears that the Boynesiders will go into the game with no such anxieties.

“It’s always easier to be second and go chase the team who are top of the league,” Drogs midfielder Jamie Hollywood told extratime.ie.

“The pressure is never really on you and we certainly didn’t feel any pressure on us. We just took it one game at a time and looked to keep winning one game after another.

“We’ve nothing to lose. Mentally, there’s no pressure on us at all and we’re going to take it as we have done in recent weeks and go again and hopefully nothing changes and we can keep the results ticking over.

“We haven’t really spoken about winning the league. It’s not been isolated or been pressured on us to win it.

“Our main concern is just keeping things the same – staying sharp in training and the usual that has kept us up there in the last few weeks.”

Drogheda have not released any team news as of yet, but they are expected to have a fully fit squad to choose from ahead of the visit of Shelbourne.

Shels know that they are only a win away from securing their return to the top-flight when they face Drogheda United at United Park on Friday evening.

The Reds could also earn a point to leave themselves in a brilliant position to seal their return to the Premier Division – with a home tie against Limerick next up.

However, they will be keen to ensure that this does not go down to the final day – with Tim Clancy’s Drogs continuing their relentless chase of Shels over recent weeks.

With the prize just a mere ninety minutes away, Shelbourne boss Ian Morris is calling on his sides support to help pull themselves over the line.

“You see the numbers that are travelling. With that atmosphere, it could feel like a home game to us.

“They score a lot of goals, while conceding a lot as well. They look to outscore the opposition, but you see the last couple of games between us have been close competitive games,” he said.

“We’ve approached this game as we have every other game, nothing has changed, we’ll be looking for three points as we would every game,” he said.

Despite being one win away from the First Division title, Morris said they will “put that to the back of our minds.”

“We’ve sat down a couple of times and it’s been great to have the input that we’ve had. The younger players are very lucky to have some of the characters and pros we have.

“It’s a great dressing room, but that doesn’t mean the younger players haven’t given great input themselves,” he added.

While morale in the camp appears high, John Ross Wilson continues to miss out as does Daniel Byrne.

Shelbourne have been beaten in two of their previous three away games – with defeats away to both Cobh Ramblers and Bohemians coming before the dominant win over Longford Town at City calling Stadium.

Drogheda United are the highest scorers in the First Division this term with 57 goals to their name after 25 games. However, they have also conceded 29, the worst of the top half sides in the second tier.

Four of the Reds five defeats have come away from home so far this season – with defeats at Longford, Cobh and Cabinteely setting the Reds back on their quest for the First Division crown.