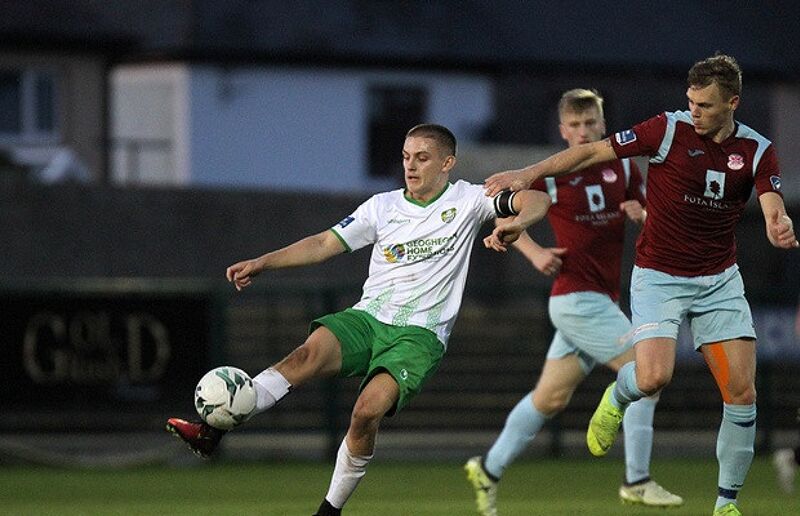 Pat Devlin’s Cabo can seal their spot in the First Division promotion playoffs with a win over struggling Athlone Town on Friday evening (kick-off is at 7.45pm).

Cabinteely head into the pivotal clash off the back of a point against Cobh Ramblers last time out. Paul Fox levelled for the South Dubliners after the hosts had taken an early lead.

Cabo, who only joined the League of Ireland in 2015, have an opportunity to reach the Playoffs for the first time with a win over Athlone.

However, Devlin is fully aware of the task that his side faces against the First Division’s second from bottom side.

“We’re getting near the end. Having a game like this will define our season. I am looking forward to it.

“It’s another big game, but Athlone will be tough to beat, as they always are. We must be at our best against them.”

The former Bray Wanderers boss also praised the club’s volunteers who have helped the club throughout the season, both on and off the pitch ahead of a potentially historic night for the club.

“They have been fantastic. They have done brilliant work to help the team and club. We really do appreciate their time and effort.”

Cabinteely are unbeaten versus their midland’s counterparts so far this season, with a draw and a win against Terry Butler’s side.

On the Midlander’s last visit to Stradbrook, they were eventually undone by a late Rob Manley winner that arrived in the 85th minute.

Jack Watson and Shane Barnes are the Green and White’s only injury concerns heading into the Friday night clash.

Athlone Town will be looking to shake off their recent malaise with a positive result and showing away to Cabinteely on Friday evening as they look to build for the 2020 First Division campaign.

After a strong start, Athlone have fallen away in dramatic circumstances, falling to 9th position in the First Division standings.

Offset by inexperience and turbulence on the field with player departures and injuries, Butler has had to take the positives from an improved showing from his young side this year.

It has been difficult for Athlone to continue their imperious early season form given the lack of experience within their ranks.

However, the likes of Paddy Kelly and Aaron Myles have both impressed this year for the Blue and Black of the Midlands – two players who will certainly have their suitors during the off-season.

Despite their lowly league position, Athlone are still only two points behind Galway United in eighth spot – being on 17 points compared to the Tribesmen’s tally of 19.

The points total of 17 for Athlone is already ten points better off than their predicament last year where they only picked up seven points in all.

John Morgan is Athlone’s only confirmed absentee ahead of the trip to the capital, with the former Wexford man serving a suspension after a recent dismissal.

The Friday night showdown will bring back memories of the sides first clash at Stradbrook in the League of Ireland, with Cabo running out two-nil winners thanks to goals from Shane O’Neill and Sodiq Oguntola.

Athlone Town have only won once previous at Stradbrook – with a win coming all the way back in October 2015.

First Division top scorer Rob Manley has scored three goals in two games against Athlone so far this term – where the Green and Whites have picked up four points from a possible six against Terry Butler’s side.