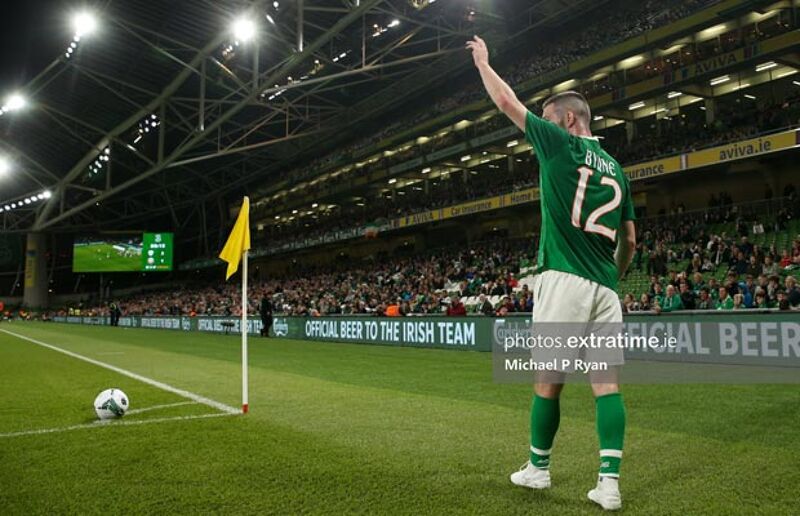 The Republic of Ireland have defeated Bulgaria 3-1 in an international friendly at the Aviva Stadium.

It was a game of two halves and debutants, with James Collins, Alan Browne, and Kevin Long all grabbing their first goals for their country as Jack Byrne also impressed.

There were ten changes to the Irish team that drew 1-1 with Switzerland last Thursday.

Mark Travers and Josh Cullen both started with Travers becoming the first player from the inaugural Airtricity National U17 League to make his full senior debut.

Bulgaria, ranked 60th in the world, lie bottom of their European Championship Qualifying Group, following a 4-0 loss to England last Saturday. The eastern Europeans made nine changes to that team.

From the beginning it was gearing up to be a soulless affair with a small attendance, and probably not a realistic opportunity for players to force themselves into the starting XI for the game against Georgia.

An uneventful half coupled with a dull atmosphere initially justified anyone’s decision to stay at home.

Neither team created any opportunities that put either side under any serious pressure.

A half chance fell the Bulgarians when Kristian Dimitrov had a free header from a Nikolay Dimitrov corner but fired over from a difficult position.

Alan Judge, arguably Ireland’s most lively player of the first half, had a headed chance but his looping effort was easily covered by keeper Hristo Ivanov.

Josh Cullen did well to stop a shot from Daniel Mladenov after the winger was put free on the left from a crisp pass by Bozhidar Kraev.

Ronan Curtis grew into the game as the half went on forcing a good reactionary save from Ivanov after his cross missed the head of Scott Hogan.

There was a thankful feeling around the Aviva when the referee blew for the end of a half that lacked any urgency and was littered with constant inaccuracies.

A goal seemed like the only way to breathe back into the game and one was delivered in the 56th minute.

Curtis’ shot was saved at the near post, as Scott Hogan looked to tap in the rebound from point black range. Ivanov did well to get a foot to his shot but Alan Browne was also in the vicinity and tapped in for his first goal for his country.

The away side must be credited with fighting back, and they were rewarded with a penalty ten minutes later.

Ivan Goranov stole the ball off Cyrus Christie before slipping it to Kraev. The lanky and awkward forward turned John Egan who took him down before he could shoot.

Substitute Ivelin Popov stepped up and hammered home an impressive penalty high into the net.

One of the biggest cheers of the night was the one saved for the first cap of Jack Byrne, and the Shamrock Rovers star was quick to prove his point.

He looked hungry to get on the ball and stepped up to send in a pin point corner to the back post where Kevin Long rose brilliantly for a headed finish.

Ireland killed the game off a few minutes later with their best move of the game.

Byrne was heavily involved again and sent a perfect floating ball over the top to Enda Stevens. The fullback’s first time cross was met by debutant James Collins who did well to stretch and guide the ball into the net.

Egan nearly made it four after another dangerous Byrne corner, but could only head over the bar.

After a dire first half, the second balanced out the match, and no matter what club you follow, all League of Ireland fans should be excited by the cameo of Byrne.

James Collins’ debut and first goal was another positive, as was the performance of debutant and man of the match Josh Cullen.