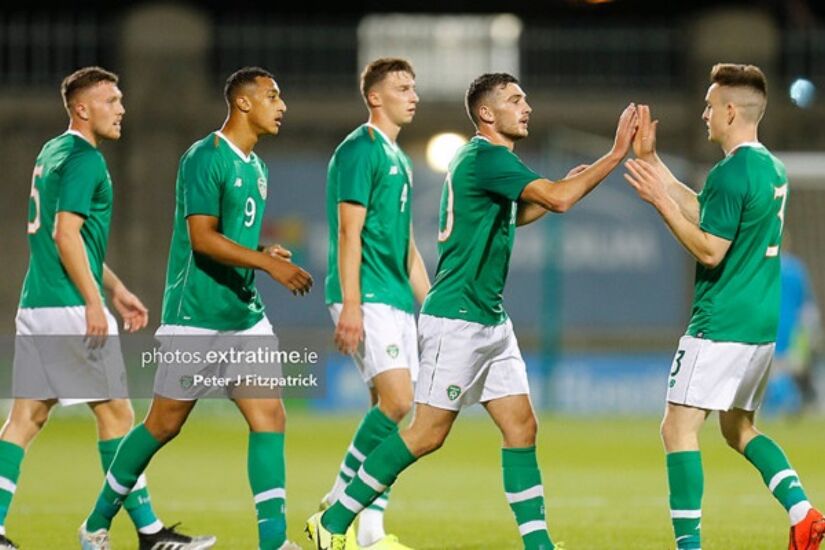 Watch: Troy Parrott scores two crackers as Ireland under-21s come from behind to win in Sweden

Troy Parrott was sprung from the bench and scored twice as Ireland under-21s overcame a half-time deficit to make it three wins from three in Euro 2021 qualifying away to Sweden.

The Tottenham Hotspur built on his goalscoring debut against Armenia on Friday night with two spectacular finishes as Stephen Kenny’s side secured a well-deserved win on the road.

The Boys in Green trailed to a 19th-minute strike from Sweden captain Mattis Svanberg, the first goal they’ve conceded in qualifying so far.

Ireland dominated the remainder of the game but went in at half time frustrated and behind, despite efforts from Aaron Connolly and Daniel Mandroiu troubling keeper Pontus Dahlberg.

Things got worse as Mandroiu was forced off with an injury early in the second half but it was his replacement, Parrott, who turned the tie.

Connolly missed a penalty but his blushes were spared when the 17-year-old smashed home after Jonathan Afolabi’s cross was only half-cleared by the home defence.

Ireland left it late, and there were only three minutes remaining when Conor Masterson met Jayson Molumby’s corner with a precise header into the corner of the net.

What a header and look at what it means to the squad ????

And Parrott made sure of it as the Swedes poured forward in search of an equaliser, calmly scooping the ball over Dahlberg to make it 3-1 and job done for Ireland.