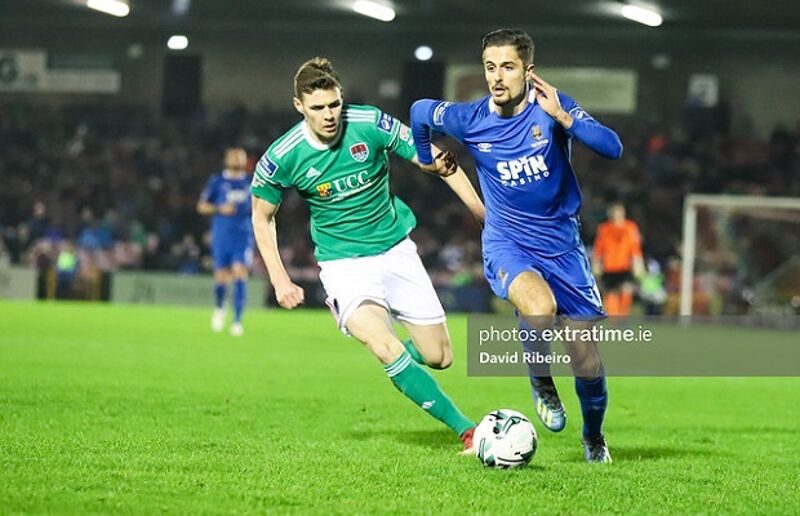 The Leesiders went down to a 4-2 defeat at the same venue on Friday night at the hands of Sligo Rovers in the former Longford Town manager’s first game in charge.

Former City striker Rónán Coughland and Romeo Parkes each notched a brace for the Bit o’ Red, while the home side struck back through Dan Casey and Shane Griffin.

A second successive home defeat would see Fenn’s side drop back below Waterford into eighth spot – though they do have a seven-point buffer to Finn Harps in the play-off spot.

“I’ve looked back on the [Sligo] game but, when you have a quick turnaround between matches, it is difficult to do a lot,” said Fenn.

“We know we have to be a bit more solid. We were too open on Friday. I wanted us to go out and attack and win the game, but the other side of it is that we need to defend better and we will.”

“The games against the teams around you are always big games; you don’t want to lose them, especially at home.

“Waterford picked up a draw on Friday, and from what I know, they played well and probably deserved a win.

“We want to go out and win the game. We are at home against the team directly below us in the league, so it’s there for us.”

Cian Bargary, Cian Murphy, Gearoid Morrissey and Kevin O’Connor all miss out through injury, but Conor McCarthy returns from suspension.

Waterford could move above Cork City into fourth with three points on the road against their fellow Munster side.

A hard-fought 1-1 draw at home to Derry City will have given Alan Reynolds’ side some confidence after four successive league defeats, one of which was to City.

Michael O’Connor scored late in the first half to cancel out Junior Ogedi-Uzokwe’s early opener and earn a point for the Blues.

“I was happy with the character, application and the work rate that the players put in [against Derry City],” Reynolds told the club’s media team.

“It was a big game for us and it was important that we got something from it so in that regard I’m happy.

“Travelling to Cork […] if we can build on the last two performances then we’ve got every opportunity to get a good result and move up the table.

“We made a number of changes last weekend, switched it up a bit and it had the desired effect.

“But now we head to Cork without one of our best players in Zack [Elbouzedi] because he’s training with the Irish U21s who don’t play until Friday which is frustrating.

“That's another challenge we need to work with but the lads know it’s a game to go and win.

“Neale will no doubt have Cork ready, he hasn’t been there long but we need to be wary of what they’ll throw at us.”

Dean Walsh remains out with injury, Rory Feely and Walter Figueira are doubts, while Zack Elbouzedi is on international duty.

This is the final meeting between the sides this season, having already met on three occasions in the league.

The first two games, at Turner’s Cross and the RSC, finished 2-0 to the Blues, with Zack Elbouzedi finding the target on both occasions.

The most recent meeting, at the RSC in August, saw City win 2-1 thanks to goals from Conor McCarthy and Mark O’Sullivan.