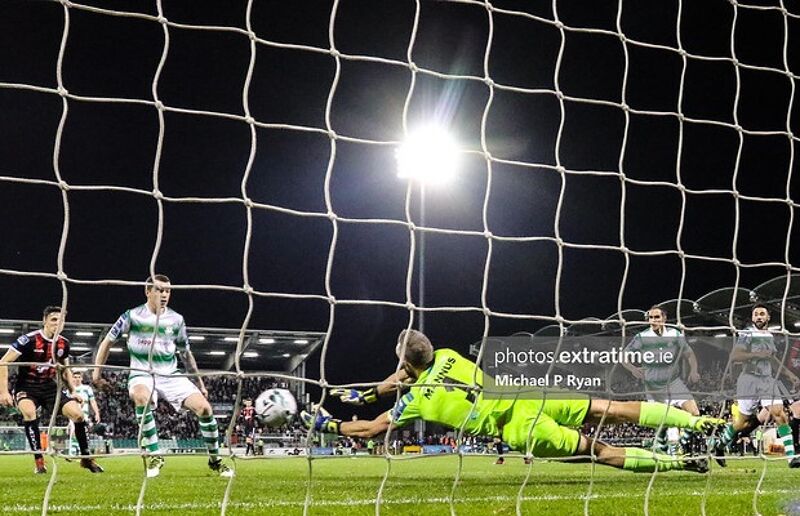 Shamrock Rovers will be looking to banish their Dublin Derby hoodoo when they welcome Bohemians to Tallaght Stadium (kick-off is at 8pm).

The Hoops come into the game off the back of an unconvincing two-one win over Waterford on Tuesday evening.

Graham Burke’s early second half winner was enough to see past the challenge of the Blues despite a late scare when Sean Kavanagh was forced into a late last-ditch challenge to prevent Walter Figueira turning home.

Speaking to his club’s media team, Stephen Bradley has claimed his side will treat the clash against Bohs as they do every other game.

“We’ll approach it like we approach every game. We couldn’t be in any better shape going into it in terms of our performances the last few months, the way we’re playing and the goals we’re scoring.

“When you watch back the last game from Dalymount there were large parts of the game when we were really good. In certain games there’s an element of luck involved as well.

“Not just in the Bohs games but in the games at home to Sligo and Derry when we dropped points, there’s times when we miss certain chances.

“We do have to look at that, correct it and put it right but you can’t look too deeply into it either.

“We’ve just got to concentrate on what we do well and approach it in the same manner.

“We’re going into it to win the game and win three points. It’s a big Dublin Derby and our fans have been brilliant all year, travelling in their numbers up and down the country and across Europe.

“I’m sure they’ll come out in their numbers again tomorrow night and it has the makings of a really good game.”

Dylan Watts is rated as doubtful after picking up a knock on Tuesday evening against Waterford.

Neil Farrugia continues to miss out with injury while Joey O’Brien is expected to feature.

Bohemians will be looking to continue their Dublin Derby dominance against Shamrock Rovers on Friday evening when they make the trip to Dublin’s Southside.

Keith Long’s charges have stuttered in recent weeks and they will be acutely aware that they need to improve on recent performances if they are to secure victory against their fierce rivals.

Echoing that sentiment is captain Derek Pender, who spoke to his club’s media team earlier this week.

“UCD game aside, we haven’t been playing as well as we are capable of. We know we can do better.

“The performance in Dundalk was probably the worst we’ve played in about three years.

“The most important thing was we got over the line against Longford last week. We started afresh this week in training, and it’s been a good week.”

The Gypsies captain soon added; “We’re looking forward to it. The Dublin derbies are great occasions to play in for both sets of players.

“It’s a game every player wants to be involved in. People go on about the record, but that’s not something we can think about.

“Each game is a new one and you can’t be thinking about previous meetings.

“Rovers are in great form at the moment, so it would be foolish to think about any previous games against them.

“We know how important these games are important to fans. But we’re under no illusions as to how tough a game it will be.

“Fans have been right behind us in recent years – not just in Rovers games. But in games like that they really get behind you, which is hugely important and gives everyone a lift, particularly somewhere like Tallaght.”

Conor Levingston and Keith Ward are both doubts for the visit to Tallaght Stadium as is Ryan Graydon.

Cristian Magerusan and Dinny Corcoran continue to miss out with long-term injuries.

Bohemians have not been beaten by their arch-rivals since May 2017, when the Hoops secured a comfortable two-goal win Dalymount Park with Brandon Miele and Trevor Clarke both scoring in the first-half.

Stephen Bradley’s side have only fallen to defeat twice at home all season. Both defeats have come against Bohemians and Dundalk by a one-goal margin.

The Gypsies have only conceded twelve times on the road so far this season from 15 games. Keith Long’s charges have however only scored 13 on their travels in the league.