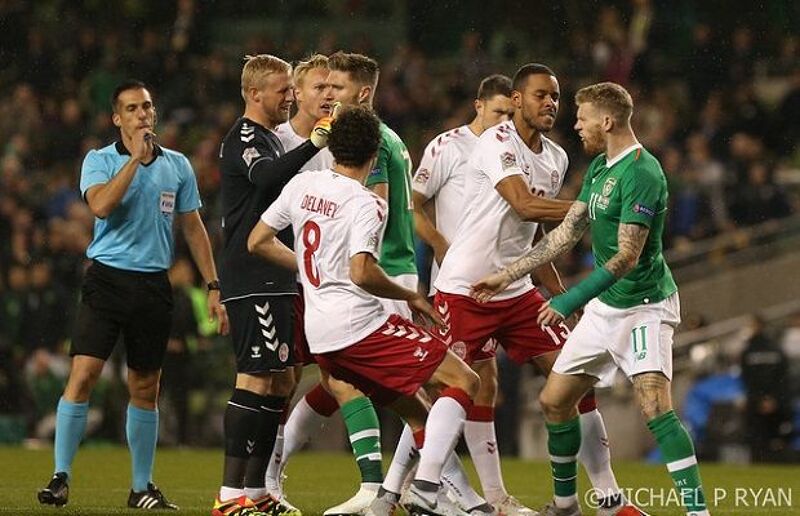 This will be the sides’ fifth meeting in just over 18 months following their World Cup 2018 play-off double-header and being paired together in the UEFA Nations League.

Age Hareide’s side have had the better of those meetings, winning 5-1 in Dublin in November 2017 as the Danes booked their place at the finals in spectacular fashion.

The three other meetings have each finished scoreless, however, as Martin O’Neill’s compact and functional Irish side won few fans round Jutland way.

“I don’t think any Danish player will have disrespect for any Irish player. They are professional players playing at the highest level in England, most of them,” he said.

Christian Eriksen, who scored a hat-trick in the 5-1 demolition. met up with the squad only on Wednesday.

He was given a few days’ extra break to recover after Tottenham’s Champions League final defeat to Liverpool.

“We saw the differences in the set-up of the way they wanted to play against Georgia. Even the Gibraltar game was difficult, it was hard to play,” said Hareide.

“For us, we concentrate on our own play. We don’t think so much about the opposition and what they will do.

“We try to concentrate on our own way of playing and hope we can handle that in the best possible way, regardless of who we play.

“We know the Irish team very well because we have played them a lot over the past two years. We know what to expect. They are a strong physical side and well organised.

“If they want to try and press us, that’s okay. We have to be prepared for that as well.”

Denmark suffered a late injury blow as Andreas Bjelland was forced to pull out with a calf strain. He was replaced by Victor Nelsson, who was promoted from the under-21s.

Ireland travel to Copenhagen in search of their first win over the Danes in 12 years and their first competitive win since 1979.

Three of the last four meetings between the sides have finished 0-0 – with one notable 5-1 in the middle – but Mick McCarthy has since replaced Martin O’Neill as manager.

Still, it’s that 5-1 defeat in Dublin 18 months ago that will be foremost in the minds of the Irish players as they take to the Parken Stadium turf on Friday night.

“Obviously we had a bad result against them [in Dublin], which was one of the toughest nights of most of our careers,” said defender Shane Duffy, who opened the scoring that day.

“We went back out there in the Nations League and that probably was sort of a nothing game at the time, so we all know that it’s a huge game now.

“It’s one that, I don’t know if it is revenge or not, but we all want to go to the Euros and they’re in front of us so we have to beat what’s in front of us.”

“We have got to play our game, I think that’s what the manager said since he first came in. He wants to play his way, our way, and we are worried more about us than other teams.

“That’s the approach that we will hopefully take, and go out there and out put our stamp on the game and go for it.

“Like I said before, we have got to have the winning mentality in the group, and I think that’s what we have.

“We are a lot closer than what people think. The 5-1 game is probably the only one where we were outclassed and outplayed on the night.

“We’ve got top players here in this team as well and in the squad. We’ve got that bond together that maybe other countries don’t have and we’ve got that quality.”

Mark Travers, Shane Long and Alan Browne have all been forced to pull out of the squad in the week leading up to the game, with Bohemians’ James Talbot the only addition.

Denmark and the Republic of Ireland have met a total of 17 times since their first clash on October 3rd, 1956, a 2-1 World Cup qualifying win for the Irish.

Ireland have had marginally the better record across the 17 games, with five wins to Denmark’s four, while eight of the games have finished in a draw.

Taking friendly games out of the equation (Ireland have won both of their non-competitive meetings) and it’s four wins to Denmark and three to Ireland.

The teams met twice in qualifying for the World Cup in 1994, when two draws were enough for Ireland to edge out the then European champions for a place in the finals.

Ireland’s last competitive win came on May 2nd, 1979, when a Johnny Giles-managed Ireland side won at Lansdowne Road thanks to goals from Gerry Daly and Don Givens.

Steve Staunton was manager the last time Ireland beat Denmark, a 4-0 friendly win in Aarhus in 2007.

Robbie Keane, who is now a member of Mick McCarthy’s management team, and Shane Long, who misses out with a hamstring injury, scored a brace apiece.

Referee Cuneyt Cakir was the man in the middle when Ireland played Belgium at Euro 2016 and failed to award a penalty to Shane Long moments before Belgium’s opener.

The match will be shown live in Ireland on RTÉ2 (coverage begins at 7pm) and Sky Sports Main Event (coverage starts 7.30pm).