James McClean: 'The footballing authorities in England are hypocrites & cowards' 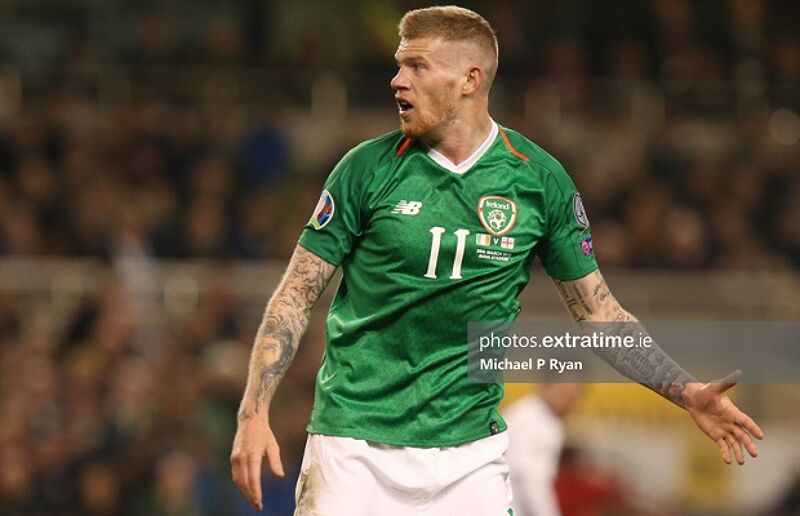 Republic of Ireland international James McClean has branded the footballing authorities in England ‘cowards’ and ‘hypocrites’ over their handling of sectarian abuse in the sport.

The Stoke City winger criticised the FA and anti-racism charity Kick It Out for not speaking out against the ‘seven or eight years’ of abuse he’s received for being an Irish Catholic.

Footballers including Raheem Sterling and Danny Rose have been lauded for standing up to racist abuse suffered during March’s UEFA Euro 2020 qualifier in Montenegro.

However, while acknowledging those players were rightly backed by authorities, McClean noted that the same back-up hasn’t been there for him over years of persistent abuse.

“What I get week-in, week-out, compared to what he’s got maybe one game, for the last seven or eight years, there hasn’t been a word.

The Derry native has been regularly abused both by opposition fans and those of his employers’ since opting not to wear the Remembrance Day poppy on his shirt in 2012.

He posted a ‘birthday card’ he received on his social media account earlier this year to demonstrate the sort of abuse he is forced to endure on a regular basis.

McClean grew up on the Creggan estate in Derry, the starting point of the civil rights march on Bloody Sunday that saw British soldiers shoot 28 unarmed civilians, killing 14.

Footballers in Britain are expected to wear the poppy during the month of November and the majority, including his Ireland teammates, acquiesce.

McClean explained his contrary stance in an open letter to Wigan Athletic chairman Dave Whelan, his employer at the time, in 2014.

Some of his teammates at international and club level backed him both publicly and privately, with Jonathan Walters and Keiren Westwood both tweeting their outrage.

However, the FA opted not to comment – telling the 42.ie the matter was subject to a police enquiry – and Kick It Out released a belated statement.

“After we contacted them first, Kick it Out, I got a measly statement because there was a lot of pressure on them, which meant nothing to be honest.

“To put it bluntly, I’m a white Irishman and that doesn’t matter to them. This kind of thing happened to Neil Lennon, didn’t it?

“He gets abuse about being Irish and nobody does anything. The proof is in the pudding, isn’t it? If you’re a white Irishman, nobody cares.

“The reason I put it up was just to highlight the fact that if I wasn’t a white Irish guy there would have been a bigger uproar.

“And I was right in doing that because there was still nothing, so I proved my point right. The only reason for putting it up was to highlight out how much of hypocrites they are.

“To be fair, I don’t know what was more shocking, the card or his spelling. Idiots will be idiots, won’t they?”

McClean re-iterated that he didn’t post the example of the card in search of sympathy or support, merely to expose the authorities’ double-standards.

“I don’t want their praise – they can ram their praise for all I care. I made a point of just highlighting the difference and the hypocrites they are.

“I didn’t [report it to the police] but they got a third-party complaint. I’m not a grass.”

McClean doubts there will be any move to address the sort of abuse he continues to face across the length and breadth of England, though he feels the solution is obvious.

“It’s pretty clear what they have to do to change it, isn’t it? What they’re doing with the whole Sterling thing, don’t be a hypocrite and do it with whatever.

Diane Caldwell: ‘As a lifelong (Manchester) United fan, it’s a dream to sign for the club’