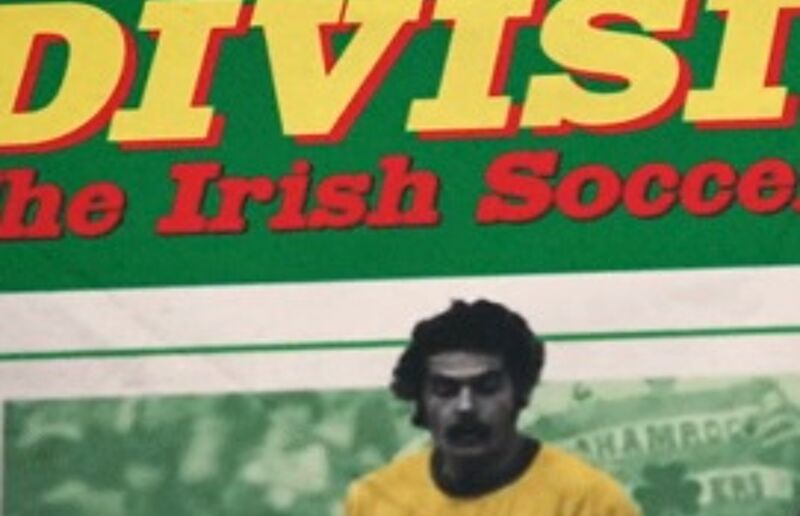 Featuring an array of talking heads, a combination of professional historians and footballers, the show also took the opportunity to show us some of Irish football’s greatest hits: Goodison '49, Sweden '58, Valencia '82, and the magical moments of the Jack Charlton era.

These football highlights are often set in contrast to the death and destruction of the Troubles. While both the football and the political violence help to contextualise one another, I would question some of the choices on the basis that they are, perhaps, overly predictable: a history of crucial goals and high-profile atrocities.

The great strength of Division is its coverage of the act of the division or split itself. The origins of the Leinster Football Association (LFA) and the growing tensions this engendered are dealt with expertly by Mike Cronin and Cormac Moore.

Especially worthwhile is Moore’s description of the various attempts at re-unification in the 1920s and 1930s, and Cronin’s discussion of football in Ireland during World War I and the Revolutionary period.

Cronin’s dismissal of some of the Belfast-based IFA’s assertions in 1921 was most welcome. Cronin noted that although the IFA refused to stage matches in Dublin in 1921, the death rate in Dublin was probably less than that in Belfast during the War of Independence and Civil War periods.

To be fair to the IFA, many of the deaths in Belfast occurred during late 1921, so at the time they were claiming that Dublin was unsafe it was certainly less safe than Belfast.

Although it is also worth pointing out that, within a few weeks the IFA’s decision, the final of the British Army’s Garrison Cup took place in Dalyer and Lansdowne Road hosted a rugby international between Ireland and Scotland. Both passed off without incident.

The phenomenon of dual IFA/FAI internationals is deftly dealt with and the show deals with the nuances of the FIFA vs home nations divide in association football very well.

Although I don’t believe, as the documentary makers seem to, that this was much of a factor in the division of the game here; rather, FIFA were used as a means to an end by the LFA and FAI.

Nor can the assertion that the state encouraged football as something that ‘bigged us up as a nation’ be sustained given the havoc the de Valera government’s ‘entertainment tax’ caused during the 1930s.

The show might also have noted, say after Katie Liston’s discussion of football’s global popularity, that association football is the most popular field game in the 32 counties in terms of playing numbers and TV viewing figures.

Division has, to my mind, two major weaknesses as a piece of public history. Firstly, it fails, almost completely, to deal with domestic football, placing all its emphasis on the international team(s).

Secondly, it further fails, almost as completely, to deal with northern nationalism and its place in the story of Irish football. It is a rare occasion indeed when the Republic of Ireland senior team takes the field without a tricolour bearing the words ‘West Belfast’ adorning proceedings.

The original split is put down to three factors: (1) the above mentioned decision of the IFA to refuse to play games in Dublin; (2) a row over the flying of the tricolour in the crowd during an amateur international in Paris; and (3) a decision to force Shels to replay an Irish Cup semi-final versus Glenavon in Belfast after the original drawn game had been played there.

Surely the 1920 Irish Cup semi-final between Belfast Celtic and Glentoran at Solitude in 1920, which featured rioting and gunfire and led to the subsequent suspension of the west Belfast club from competition ought to have been mentioned here?

Particularly as it would have provided important background detail for the points that the programme makes about the Falls District League’s affiliation to the FAI, and the fact that neither association saw itself as being ‘partitionist’.

Also, the discussion of the Shelbourne-Glenavon game in 1921 is the last mention of club competition until Brian Kerr growls about the fact that he would welcome a unified league just before the closing credits.

Although the programme does open with some coverage of the Dundalk-Linfield game in 1979, that’s another predictable choice which was not as unique or exceptional as some documentary makers have claimed.

Obviously, you are reading the words of a League of Ireland supporter, on a (primarily) League of Ireland-focused website, so there may be a question of pro-domestic league bias on the part of this review. That notwithstanding, I do feel that Division fails to properly historicise the relative importance of domestic and international competition in the first four decades of the FAI’s existence.

For example, in 1932, the year of one of the failed attempts at re-unification described by Cormac Moore, the Football Association of the Irish Free State did not stage a single international at home - a fact that may or may not help to explain how, in that same year, the final of the ‘Free State Cup’ between Shamrock Rovers and Dolphin (the Hoops’ first four-in-a-row) attracted a larger crowd than Kerry vs Mayo in the final of the GAA’s ‘All-Ireland Football Championship.’

In terms of northern nationalism, the treatment in the show overall is grossly simplistic. The discussion about the phenomenon of players born in the six-counties playing for the Republic is dealt with in a facile manner. James McClean and Darron Gibson are mentioned, but not Shane Duffy. The fact the home-town team of these three men plays in the League of Ireland might have been worthy of discussion.

Likewise, Martin O’Neill’s stewardship of the ROI is described in terms of an Northern Ireland legend managing the Republic, as if O’Neill’s nationalist background and status as former manager of Glasgow Celtic were irrelevant to his being given the job, and, indeed, his desire to seek the post.

The treatment of the Loughinisland massacre was unnecessarily tepid. The UVF targeted O’Toole’s pub in the Co Down village at that particular time on that particular night in 1994 because they knew that nationalists would be in there watching the Republic play Italy in the World Cup. It was not a random attack, as one might suspect from watching Division. Hence the decision of the FAI to send the ROI team out in black armbands in Poznan in 2012, as another game against Italy fell on the 18th anniversary of those tragic events.

The lack of depth continues with Gerry Taggart’s description of the Northern Ireland-Republic of Ireland clashes as a ‘derby’ and Taggart’s claim that he didn’t want the Republic to qualify for USA ’94 during the famous/infamous clash in late 1993.

That may have been true of the ex-Leicester City midfielder on the night in question but, to my mind, it does seem as if many northern nationalist football supporters would be capable of supporting both teams to a greater or lesser degree. Were the game to happen today I suspect, on the basis of their social media output, that many Cliftonville fans would support whoever needed the points most.

Of course, dealing with club football and northern nationalism in a more authoritative fashion would take time. I would gently suggest that such would be available if the documentary had stuck to the point instead of engaging in quite so much ‘scene setting’.

Did we really need Taggart, Brian Hamilton, Niall Quinn and Don Givens to tell us about how much playing for ‘their country’ meant to them?

Likewise, I’m not sure what Brian Kerr’s description of the Shamrock Rovers XI vs Brazil game added to the store of human knowledge, bar allowing the Greener to troll the Tallaght faithful with his reference to ‘Shamrock Rovers’ Celtic-type jerseys.’ Leave the Arsenal-type jersey at home for once, Brian!

Division: the Irish Soccer Split provided a pleasant enough hour’s television. Most extratime.ie readers will get something out of watching it. However, as a historian and Irish football fan, I was left with the feeling that it could have been so much better. I suspect that many of you, my fellow League of Ireland supporters, will feel the same way.

Division: the Irish Soccer Split aired on RTÉ on 22 May.