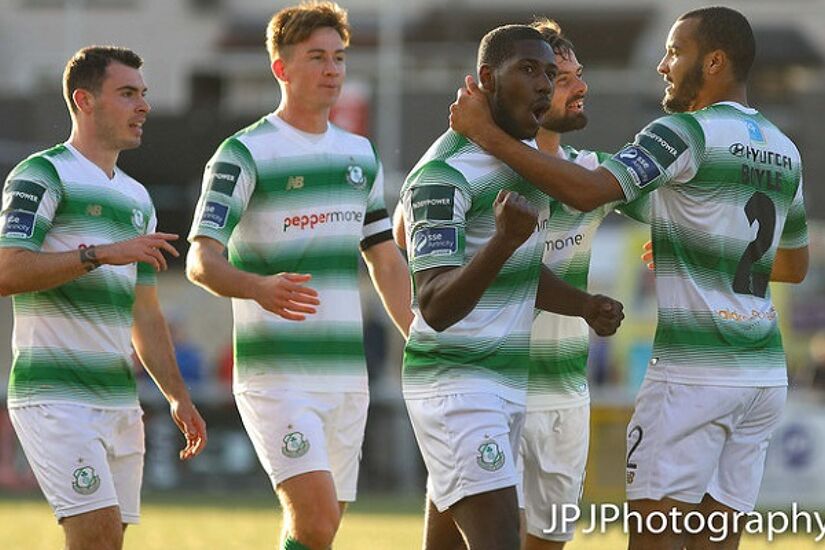 Shamrock Rovers officially secured third place Friday night as they beat Waterford 3-1 in a game which was heated on and off the pitch with both managers being sent to the stands.

Strikers Gary Shaw, Dan Carr and Sean Boyd were on target for the home side, while former Bohemians goalscorer Ismahil Akinade briefly had the Blues back within a goal.

The Hoops almost got off to the perfect start a minute in as Joel Coustrain curled a fantastic cross into the box which found Shaw, who headed home before the flag went up for offside.

Rovers continuec the pressure in the opening ten minutes with Shaw getting another opportunity from a Carr cross. The former Longford striker got up well to head it just putting it to the left of Niall Corbett’s post.

Just two minutes later, Rovers were ahead. Dan Carr was influential once again as he burst down the left before playing a lovely low cross into the six-yard box and Shaw tapped home to break the deadlock with a deflection off Corbett to help it in.

Waterford however did keep the composure holding possession for long period in the first half. Rory Feely hit a rasping volley at the edge of the box that forced former Northern Ireland goalkeeper Alan Mannus into a good save.

Just after the half hour mark Rovers doubled the lead. Former Bohemians midfielder Dylan Watts floated a ball into the box which caused panic in the Waterford defence.

The Blues rearguard failed to clear their lines, and Carr finished with a brilliantly-placed ball into the top corner from a standing position.

The opening minutes in the second half saw heated words exchanged between Bradley and Reynolds as they left their technical areas, and referee Robert Harvey sent both to the stands, which was arguably a harsh stand to take.

In a second half that had very little goal mouth action, it took until almost the final twenty minutes for the first real chance as brilliant ball by Watts found the run of Carr, before the striker dragged his shot wide of the post.

Reynolds' side did manage to pull a goal back with 15 minutes to go with the two substitutes combining.

Dessie Hutchinson played a fantastic ball from the right to the penalty spot and Akinade placed his header beautifully into the top corner to set up an interesting finish to the game.

Rovers almost wrapped the game up with five minutes to go as a Brandon Kavanagh corner from the right bounced up perfect for Joey O’Brien.

The former Bolton Wanderers defender attacked the ball with a brilliant diving header and was unlucky not to score as it came bouncing back off the crossbar.