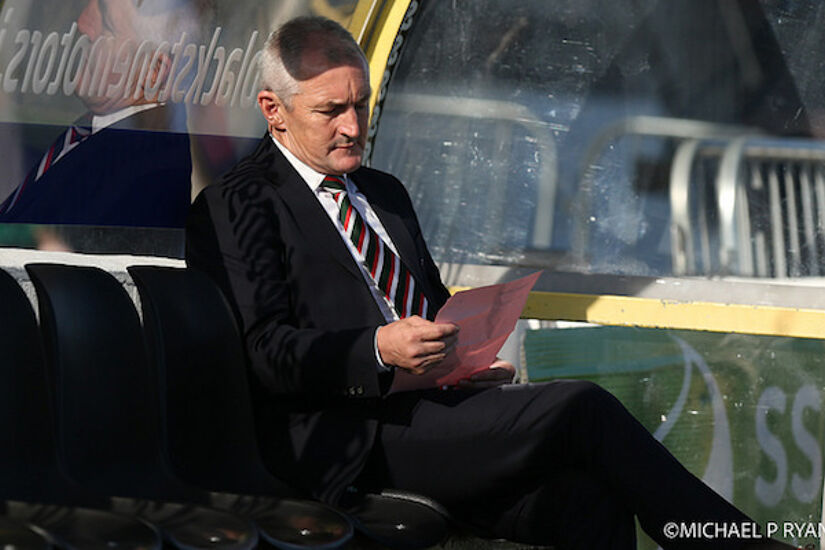 Dundalk returned to the top of the SSE Airtricity League table in the most dramatic of circumstances imaginable on Friday night. The scored a stoppage time winner to defeat title rivals Cork City 2-1 in front of what was the biggest crowd at Oriel Park so far this season.

If not a classic match in the footballing sense, this was most certainly an epic battle between two contrasting yet effective styles.

Dundalk took the lead directly after the start of the second half through Krisztian Adorjan but that goal was cancelled out by Josh O’Hanlon’s header before Sean McLoughlin – under pressure from Patrick Hoban – turned the ball into his own net late on.

Dundalk made two changes from the side that put four goals past Derry City just before the mid-season break as Sean Gannon – making his first start since the sides last meeting in April – and Adorjan were both named in the starting XI in place of Daniel Cleary and Dylan Connolly.

The Leesiders also made two alterations from the side that secured a last-gasp win over Bohemians two weeks ago at Turners Cross.

Conor McCormack and Gearoid Morrissey came in for Garry Buckley and Karl Sheppard, who both picked up knocks during the break and dropped to the bench.

Neither side was giving too much away in the opening exchanges but Ctiy did enjoy a decent spell of early pressure.

Jimmy Keohane’s dipping header found the roof of the net before Kieran Sadlier tried his luck from distance with a free-kick that was never troubling Dundalk ‘keeper Gary Rogers.

The hosts settled after that and then started to dominate proceedings without ever really testing Mark McNulty in the City goal though.

Michael Duffy dragged his effort wide after Jamie McGrath’s ball was nodded into his path by Patrick Hoban in what was a beautiful passage of play.

The Leesiders defended expertly throughout the first period. They were able to contain a side that had scored 20 goals in their last five league outings but they were left wanting when Robbie Benson found himself in space after some uncharacteristically slack defending before rifling a shot which fizzed just over the bar.

The visitors were not short on chances of their own however.

Barry McNamee really ought to have done better when he mishit a volley which ricocheted off the ground and into the grateful arms of Rogers. Duffy’s corner from the right was then flashed agonisingly wide by the head of Hoban.

It may be a cliché but first goals have always proved to be crucial in previous meetings between what are by far the top two sides in the country. Dundalk made the breakthrough straight after the second half had begun when Adorjan finished brilliantly after being played through by Duffy.

City never panicked to their credit and equalised in the 66th minute. The ever-dependable Alan Bennett’s half-volleyed cross was headed home by the unmarked O’Hanlon.

He had just come on as a substitute minutes earlier and despite Dundalk’s heavy appeals for offside, the goal stood.

Now with their tails up after that equaliser, the visitors almost took the lead soon after when Sadlier dispossessed Chris Shields before slipping in Karl Sheppard but he fired just inches wide of the post.

Hoban headed over twice from Duffy set-pieces before Dane Massey’s cross caused havoc in the Cork box as the as the Lilywhites went in search of what would have been a priceless winning goal.

Dundalk got the that winner dramatically in the second minute of stoppage time as Ronan Murray’s cross was turned into his own net by Sean McLoughlin.

Cork City’s resistance was finally broken cue unbelievable scenes at Oriel Park as manager City boss John Caulfield was sent to the stands in what could yet prove to be a decisive moment in the race for the SSE Airtricity League title.