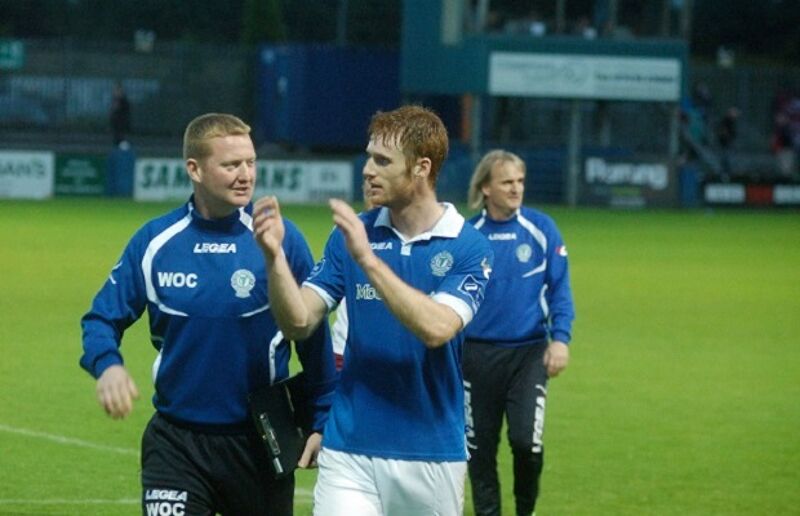 Buncrana native William O’Connor is a woodwork teacher in Balbriggan College in North County Dublin – but that’s not what he has been making the headlines for recently.

Appointed Republic of Ireland Schoolboys manager at the start of this school year, the Finn Harps coach led his side to glory in the Centenary Shield at the first attempt – much as his predecessor Paddy O’Reilly did in 2015.

O’Connor was also involved that year, as well as helping Ollie Horgan lead the Harps to promotion and managing to squeeze in some football himself as a long standing defender with Cockhill Celtic – where he is also the head of youth development.

Possessing experience at schools, international, League of Ireland and junior football, he is well placed to talk about how education is becoming increasingly important for people who also want to develop a soccer career.

“Most of the boys with Harps are in third level education and with us training in the evenings this allows them to do that,” O'Connor tells extratime.ie.

“Many are at Letterkenny IT with others, such as Mark Coyle, at NUIG. Players are becoming more educated about their education.

“An example from Donegal at the moment is Georgie Kelly (selected for the Irish Schoolboys side in 2014) who is in UCD and playing every week in the First Division.

“Years ago if you weren’t in England by the age of 15 or 16 you didn’t make it but now players like Séamus Coleman, James McClean, Patrick McEleney, Seán Maguire etc have shown that making the breakthrough in the League of Ireland is the way to go.”

He discussed how the Interprovincial competitions, which were also brought up in interviews with Fintan Sheridan and Ian Ryan, provide pupils with competition at a good standard and a potential to play at an even higher level.

Looking at the development of the 2015 side – of which O’Connor was a coach – who were the last Republic of Ireland side to win the Centenary Shield, many have already made their League of Ireland debuts.

Goalkeeper Corey Chambers (Gorey Community School, Wexford), spent time at both Waterford and Wexford before departing the Ferrycarrig Park side last summer to take up a scholarship at George Mason University in Fairfax, Virginia.

Defender Conor McCarthy (Scoil Mhuire Gan Smal) is starting to break into the Cork City squad and St Patrick’s Athletic’s Darragh Markey(Colaiste Phadraig, Lucan CBS) is making a name for himself as quite a prospect in Inchicore.

Daire O’Connor, who this season scored both the winning goal for UCD in the Collingwood Cup as well as the strike which separated the Irish Colleges and Universities and their Scottish counterparts, spoke to the assembled scholars at last November’s Interprovincial series which was held at the AUL.

He told of how his proudest moment to date was scoring in the 2015 Centenary Shield competition while explaining the many benefits of continuing to stay in school alongside developing a soccer education.

“We pick the best players at the current time and, as well as the interprovincial competitions, we’re watching the under-17 and under-19 leagues,” says William O'Connor.

“The under-19s is a good standard and we’re looking to see if the players can step up. The boys we pick are probably the best in the country and the international side allows recognition at a higher level as well as allowing players to develop by providing them with different experiences.”

O’Connor spoke about how three of his successful side against Wales in the Centenary Shield had been selected by Jim Crawford in the Republic Of Ireland under -18 squad.

He added: “the opportunity is there to push on and be selected for the nder-19s.Staying in school keeps lads disciplined and grounded on and off the pitch.

“Then, by getting selected for both the interprovincial sides and then the national team you are increasing your chances of getting scholarships at college.”

“Robbie Benson [who scored a Centenary Shield winner against England in 2010] is probably the best example [of how to develop both a sporting and educational career] by playing at one of the best teams in the country and having a degree which allows him to step into a secure job when he’s finished.”

The side which won the 2018 Centenary Shield can be found below, as well as details of their successful campaign and for more information about soccer in schools in Ireland visit faischools.ie.