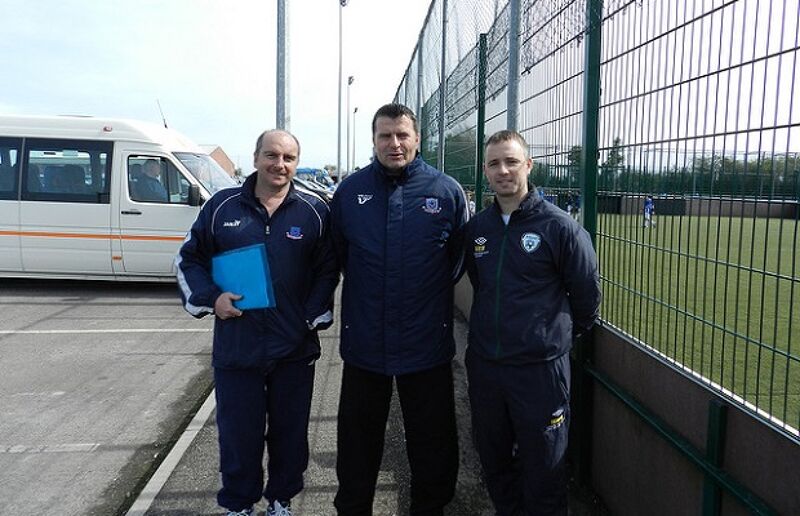 At the core of his interview with extratime.ie was an emphasis on the variety of pathways available for young aspiring professionals, both men and women, to develop their footballing and third level education in Ireland. Holistic development is the focus.

He highlighted the fact that many of the students who represented the Team Ireland at the recent World University Games, held in Taipei last summer, were currently enrolled on college courses across a wide variety of subjects.

Acknowledging that players who signed for clubs in England do continue with some element of education while in the academy system, Scanlon spoke about how the education system in Ireland allowed the flexibility for each student to study for degrees in areas which they aspire to work in beyond their footballing career.

The benefit of this approach, he said, “helps students mature properly in education whilst still in a familiar enviornment at home here in Ireland.”

Speaking of the work the FAI currently engage in with schools, colleges and universities, the Meathman explained how the 53 Development Officers are spreading the soccer word in the 3,100 primary schools throughout the country.

Scanlon also spoke of how all primary schools in Carlow town are offered the chance to link up with IT Carlow by accommodating students from the FAI Sports Coaching & Business Management course on a six-week block of coaching practice, and there are many more examples of this throughout the country.

Moving to pupils of a secondary school age, he explained that there is an extensive range of competitions available to the schools and almost 40,000 post-primary school students took part in the FAI Schools competitions last year.

Scanlon further detailed the importance of the FAI Schools Interprovincial Tournaments, as described by Fintan Sheridan here, by discussing how, during the weekend which was held at the AUL last November, options for secondary school students to continue their education at third level.

Scanlon himself made a presentation to all students from the representative sides which highlighted many of these options, as well as highlighting the careers of Robbie Benson and David McMillan as examples of how to combine both studies and soccer successfully.

Rory White, a tournament winner with Ulster in 1994 and now a careers guidance teacher, also spoke to the teams, while Daire O’Connor relayed his experience of student and sporting life at UCD while sharing stories from his time at the World University Games.

17 different third level institutions had a stand to advertise their academic courses and football scholarships on offer, while a booklet detailing many of the options available to students was produced by the FAI and distributed during the weekend. An online copy can be accessed here.

Moving on to third level itself, the growing trend of Colleges and Universities linking up with their local League of Ireland clubs was praised by the FAI Coordinator, who called it a 'win-win situation’ that colleges were keeping students in education while also facilitating the development of their sports career.

Though he continued to emphasise that the education route being followed should be based on the interests of the students and their future job prospects, in his own words: “there’s going to be a long-term career after a short football career.”

He went on to explain the assortment of scholarships made available to students and how they may take different forms – ie payment, a waiver of registration fees, extra tuition (if needed), free gym or physiotherapy etc – while reinforcing the fact that both men and women are being provided with similar opportunities.

As was mentioned in the article with James O’Callaghan here, many of the players in the WNL and WNT are excellent role models and Scanlon references current senior internationals Roma McLaughlin, Claire Walsh and Amber Barrett as “examples of how players are playing at the highest level and continuing their education.”

For men, college football also holds a fair degree of importance with many League of Ireland managers regularly watching games in the CUFL.

Commenting on the Galway United website, the former Wexford boss said: “I went to watch him play in a game for Dundalk IT, that happened to be in Galway here last month; he finished the game with a hat trick and was the standout player by a country mile.”

Current Ferrycarrig Park supremo Damien Locke is a former IT Carlow graduate and recently raided the college for five players who are currently enrolled on the Sports Coaching and Business Management Course.

Similar to Michael Schlingermann here, Scanlon speaks about the strength of the Colleges University Football League (CUFL) and how it’s important that each college, regardless of their division or size is treated equally.

Finals are played at Abbottstown – the same complex used by the Republic of Ireland Men’s National Team – and Scanlon references instances of soccer being responsible for students continuing their education, with graduates from QQI Level 5 and 6 courses in Carlow IFE enrolling on Level 7 and 8 courses in IT Carlow as a result of participating in the CUFL.

With regards to the future, Scanlon is clear about the association’s goals for the League of Ireland and the WNT.

“We see that the majority (of players) should be playing in the National League whilst furthering their education.

“We have a great opportunity to develop a unique pathway for young players here in Ireland that will give them long term benefits beyond their football careers.”