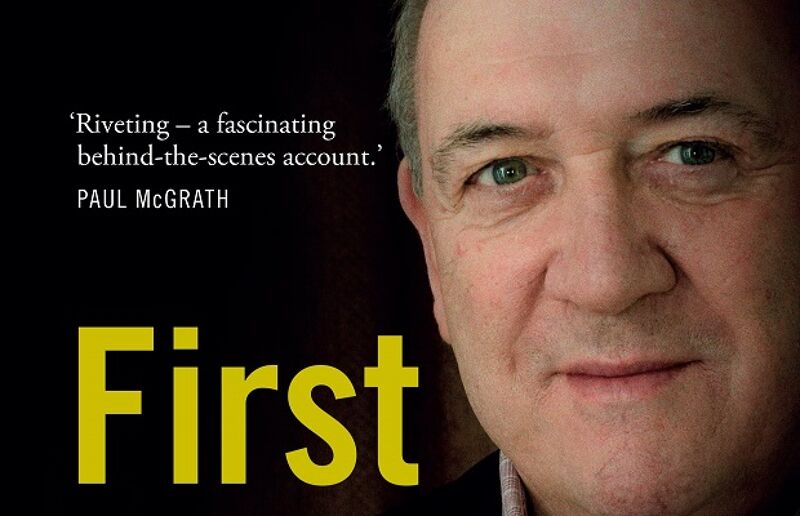 Eoin Hand is a familiar name, face and a voice to all in Irish football.

He played, managed and co-commentated on the game in Ireland – both the League of Ireland and the Republic of Ireland national team – but his life story is maybe not so familiar.

In his autobiography ‘First Hand – My Life and Irish Football’ he tells the tale of a game that has changed radically since his time playing and managing – the days of having a swig from a bottle of whiskey or a drag on a cigarette while listening to the manager give a team talk when Hand played English league football are long gone!

For those of an older generation they remember Eoin Hand as the unluckiest manager of the Republic of Ireland team. It is an iconic image of Irish football. Hand and the rest of those in the dugout in Brussels in the 1981 qualifier have their heads in their hands as a referee has seemingly robbed Ireland of qualifying for the 1982 World Cup.

Ireland had a perfectly good goal disallowed in Belgium on the stroke of half time, only to concede a controversial winner three minutes from time. Eoin Hand’s Ireland would miss out on qualification on goal difference.

If you are seeking insight into his time playing in the League of Ireland with Dundalk or Shamrock Rovers, or about winning the title with Limerick United in 1980 as player-manager, you won’t find too much detail in the 260-page autobiography.

It is however filled with stories of the incompetence and penny-pinching of the FAI and plenty of stories Hand tells against himself from a career that carried him to Huddersfield, Saudi Arabia and South Africa.

Some of the best stories in the book involve planes, trains and automobiles. There was no first class travel for the Irish team when Hand was a playing member of the squad nor when he was manager.

After a friendly against Poland the Irish team travelled from Poznan for their next game against West Germany in Berlin in a train’s luggage van!

He had to grab a lift to the airport from a passer-by Dalymount Park after Ireland’s famous 1974 3-0 win over the Soviet Union accompanied by Don Givens, who had the match ball tucked under his arm after scoring all the goals in the game!

After the FAI failed to accredit Hand for World Cup in Spain, he resorted to getting a lift into the stadium with the Northern Ireland team for their game against Austria before getting a press accreditation with RTÉ for later in the tournament.

The travel stories reach a crescendo with Ireland’s tour to South America during the Falklands War when the match against Argentina was cancelled just four days before it was due to take place. Ireland still travelled through Buenos Aires with a number of Ireland players with British passports subject to long discussions with the Argentinian authorities before they proceeded onto Chile.

Hand describes the tour as “a shambles from its conception to its execution.” It culminated in Ireland’s heaviest international defeat – a 7-0 loss to Brazil in Uberlandia (after the Brazilian FA had switched the game from the Maracana).

The teams shared a flight back to Rio after “with our heads in our hands as our opposite number sang their way through the night sky with the chain-smoking Socrates orchestrating the whole concert.”

The FAI as Hand’s former employer during his time as international manager and later career guidance officer comes in for much criticism in the book and Hand does seem to take the opportunity to settle a few old scores, none more so than with Eamon Dunphy.

There are six full pages detailing the issues between the pair who knew each other not just from playing with Ireland but in kick abouts growing up in Drumcondra. Hand describes Dunphy as “exceptionally argumentative,” and that when he began his journalistic career “Dunphy quickly set about taking a flamethrower to any good will that existed between us.”

The book has a fine selection of photos, particularly team line-ups which include Hand’s Limerick United team in the Bernabeu in the 1980 European Cup against Real Madrid and the Ireland squad in Red Square in Moscow wearing an assortment of tracksuits and woolly jumpers!

Although amongst the photos there may be a few too many Eoin Hand with famous footballer shots – these include Pele, Franz Beckenbauer, Bobby Charlton, George Best, Chris Hughton, Ray Wilkins, Martin O’Neill, Eusebio and Robbie Keane.

Hand’s life story accounted in the book dealing with the death of his father at a young age, his failed businesses, marriage breakdowns and almost dying from acute pancreatitis are all laid bare to the reader.

The game he describes seems almost unrecognisable now. It all makes for an excellent read of a time that football has now left mostly behind.