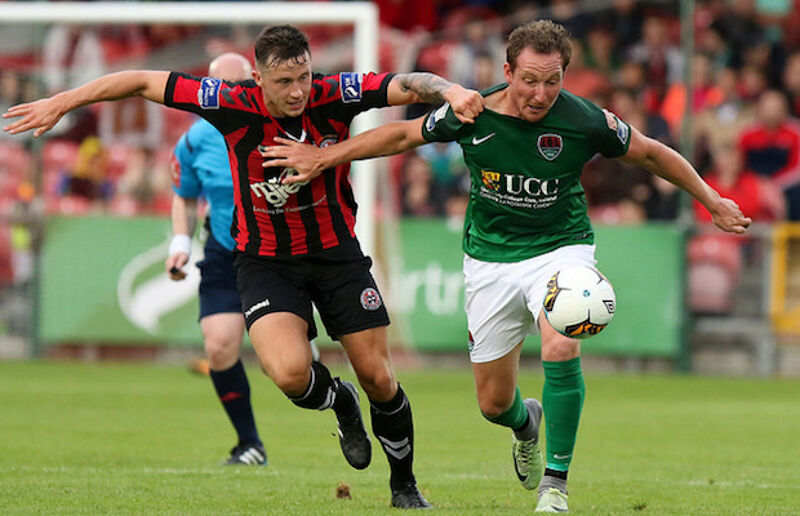 Bohemians managed tonight at Turners Cross to do what no other League of Ireland team had done so far this season and that was defeat Cork City in league action. The Dublin side was well organised and defended as if their life depended on it at times to secure all three points thanks to Georgie Poynton’s second half penalty.

The Leesiders knew coming into the game that four more wins this season would guarantee them the trophy but with many more competitive games coming up in the near future, manager John Caulfield decided to change around the team from that who defeated Galway United 2-1 on Friday.

Alan Bennett failed to make the team owing to injury - being replaced by Conor McCarthy. Meanwhile Greg Bolger, Achille Campion and Jimmy Keohane all came into the starting XI in place of Conor McCormack, Kieran Sadlier and Gearóid Morrissey.

Bohemians who are currently hovering close to the relegation spots made five changes from the sides that won the Dublin Derby against Shamrock Rovers 2-1 in Tallaght last Friday.

The game was only a few minutes old when Keohane scuffed a shot from close range, while at the other end Ward had a free saved by Mark McNulty.

However the main incident of note in the half happened on seven minutes when Warren O’Hora felt the full force of a Jimmy Keohane shot to the face requiring the centre half to receive treatment for four minutes before being replaced by Dan Byrne.

Warren O'Hora has gone to hospital for an X-ray on his jaw.

Bolger who didn’t start last Friday night against Galway was doing his best to impress John Caulfield and on 15 minutes his superb ball over the top to Karl Sheppard saw Shane Supple palm Sheppard’s shot out for a corner.

The Gypsies had to withstand a huge amount of pressure in the opening half hour but nearly went ahead on 30 minutes with O’Connor capitalising on a mistake by Conor McCarthy only to see McNulty equal to his effort.

Supple has been one of the star performers with Bohemians this year and he showed his worth on 33 minutes with a superb diving save. Keohane, who was his usual energetic self, crossed the ball to Gary Buckley who rose highest only to see his header that appeared destined for the top corner plucked out of the sky by Supple.

City were dominating the possession stats but were unable to find a way past Supple, but the home side were again saved by McNulty. Ismahil Akinade picked up the ball on the edge of the box following a defensive mistake only to fire tamely at McNulty.

Late in the half Dooley appeared ready to pull the trigger until Poynton pulled off a superb tackle to keep the game scoreless heading into the half time break.

Campion had a great opportunity within seconds of the restart but he was unable to direct his header goal wards.

Ward, who was a threat all night from set pieces, went close with a free on 50 minutes. City had a shot well saved by Supple but the stadium was soon quietened by Bohs going ahead.

Ciaran O’Connor played a pass to Akinade who was upended by McCarthy. Rob Rogers pointed to the spot where Poynton fired into the net on 62 minutes.

City pushed for an equaliser introducing Kieran Sadlier to cross a lot of possession into the box but to no avail as City suffered a first loss of the season as Bohs made it back-to-back league wins and move them nine points from safety.