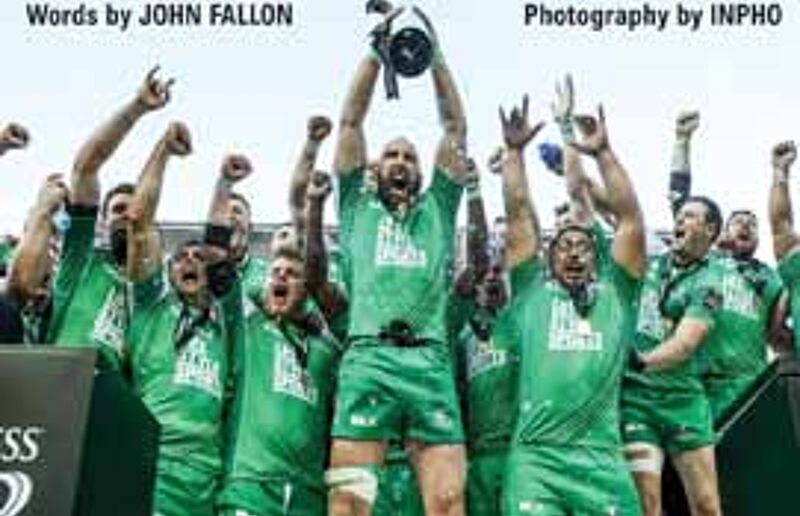 2016 will be remembered by sporting fans as the year of the underdog with both Connacht and Leicester City emerging triumphant when the odds were stacked heavily against them. In Connacht’s case they were 50/1 at the start of the season, compared to Leicester’s slightly longer odds of 5000/1.

But this story of how the men from the west won the competition wasn’t an overnight success and Galway-based journalist John Fallon, who has been reporting on them since 1984, tells the story of what made this team tick while also showing his personal experience built up over the many years following Connacht wherever they happened to be playing.

Fallon is one of those names that people just expect to see next to a Connacht match report regardless of the location and he must be up there with one of the most travelled journalists every year.

This book, while shorter than many others, numbering just over 200 pages and complemented by some excellent photographs from the INPHO sports photography agency, has a nice flow to it that makes it very enjoyable to read from the start to finish.

Each chapter is short and concise, with few if any of the chapters numbering over 10 pages, cutting down on any unnecessary information that is a major plus point of this book.

A feature of this book that is missing from many similar books is an extensive statistics section at the end of the book that makes it a reference book for many years to come, unlike other books that have tried to profile the year of Connacht’s success.

Fallon has the inside track in all things resolving around the Sportsgrounds in Galway and he says himself that he has probably interviewed Pat Lam over 250 times since he arrived in Connacht back in 2013.

Yet it is the contribution from the players, whether they be players who once played an interprovincial for the province 15 years ago to those who played a key role in their Edinburgh success, that make the book a winner.

One can imagine themselves in the dressing room listening to the players and Lam speak while it also gives an insight into how the players went about their business so as to get the ultimate reward at the end of the year.

Coming near the end of a review one has to ask themselves would they recommend it for another person? The answer would be yes as it is nice story told in a very easy to follow format that would interest the sports person regardless of whether rugby was there sport of choice or not.

The story might not be repeated for many a generation but it would be a shame to pass up the opportunity to pick up a book that perfectly details everything that occurred in this momentous Irish sporting success.