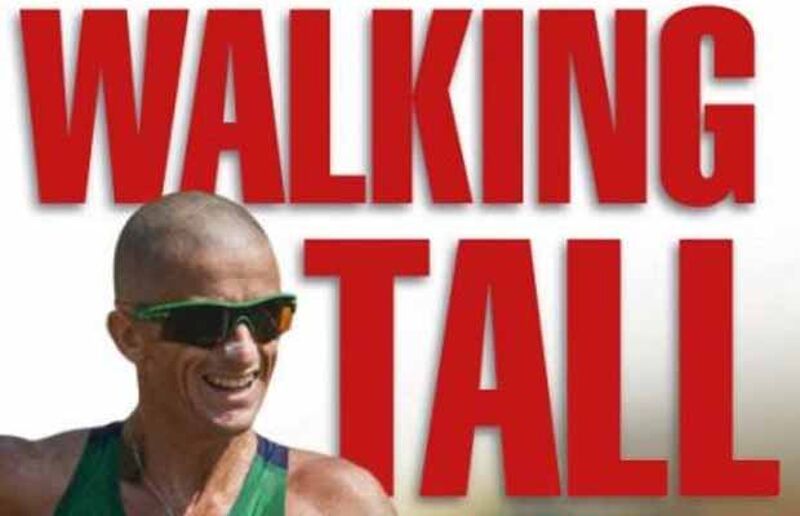 Rob Heffernan the Cork born athlete who people normally hear about every four years when the Olympic bandwagon rolls into town, launched his biography a few months back, but between the jigs and reels of completing college assignments it is only now that extratime.ie can write up the review.

Firstly, there is a common saying you will find on the internet and through any relationship book and that is “Love is blind”. Paco Fernandez, the Spanish walker is a good friend of Heffernan and despite him showing an obvious dislike to drug cheats he still fails to criticise the friend who just happened to have a parcel of drugs being sent to the house.

When one has that elephant in the room out of the way, his biography expertly ghosted by Meath man Gerard Cromwell also of Nicholas Roche’s ‘Inside the Peloton’ fame, published in 2011 to widespread acclaim makes good use of the relationships throughout his career.

The first and most important relationship is his wife Marian Andrews, herself an international sprinter who only really began to take the sport seriously when she was persuaded to do so by her husband. She is the rock of Rob’s sporting success with her unselfish behaviour including ending up where ever he is competing to mix drinks, help with video sessions among many other things.

She has been heroic in helping him succeed even though she did fall to one of the worst chat up line scenario’s one would see outside of maybe Coppers on a Saturday night; Heffernan text her asking did she want treatment on an ankle only for her to arrive to Heffernan working his charm and the rest as they say is history.

In the final chapter of the 273 page book, Heffernan admits that he will have to start repaying her faith when he writes “She has put her life on hold for me and it’s time she had her turn to do what she wants to.” Some of the examples of faith that shine through include her working and using all the money to sustain them as Heffernan was in dispute with the authorities over grants and training camp funding. This is a theme of the book running right through the pages, yet the absence of an index at the end does make it slightly harder to track in comparison to other sports books.

His family is a tougher love with his father dismissive of the youngster who wants to be a professional sportsperson instead of work the sites like his dad who can’t understand how somebody can just rest instead of work. Yet by the end of the book one feels an obvious cooling in the relationship and it is evident how much the dad is bursting at pride with his son’s achievements. Even on a more sombre note, Heffernan who shows expression with the death of his mother in 2011 clearly breaking his heart but one can take solace from the fact that she kept talking about her super son to taxi drivers up to her death.

Athletics Ireland is a minefield who he thanks at the end but one really wonders what he would really like to say considering that for long parts of the book various issues are raised towards his treatment by officials with Kevin Ankron one man in particular to get mentioned. Only for a super kind jack of all trades Liam O’Reilly, one wonders would Heffernan ever have a bronze medal in his pocket from the London Olympics.

Yet before any of the relationships occurred one must remember that this walker only took the sport up by accident in his early teens when he was deemed too small for GAA, so a kind hearted Christian Brother took him under his wing and the rest as they say is history.

The Corkman’s competitive edge shines through in the book with a few tongue in cheek references to Roy Keane. Yet in his words, he has a bit of a grudge against people who doubt him and he wants to prove them wrong when he says.

‘All of my life, being told I couldn’t do something drove me on to do it, to prove people wrong."

For a man who was written off so much to get the high of winning in a world championship is a fair achievement when one considers that he battled with huge depression, monetary issues and even a lack of coaching expertise for long periods of a career that shows that hard work will always beat talent.

It is a nice read and is well worth picking up for a Christmas present but beware of the elephant in the room when reading the book.