Book Review: A Life Too Short - The Tragedy of Robert Enke 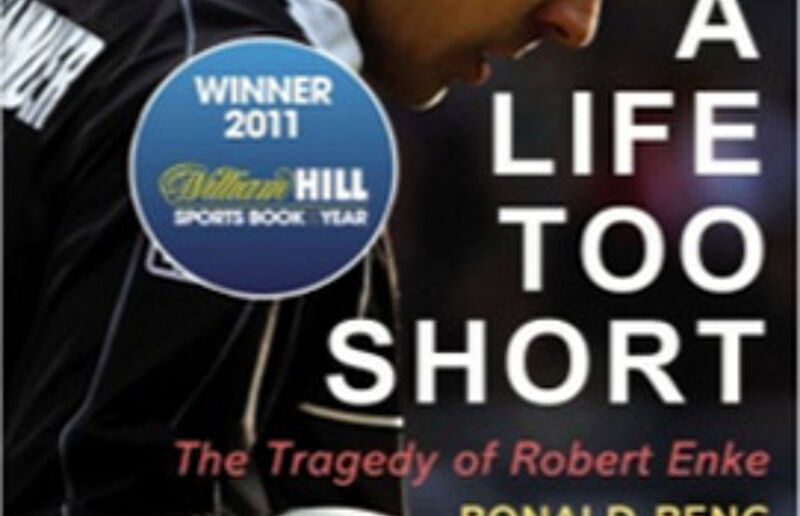 Most people read the autobiographies of sports people to gain a better understanding of their heroes, to find out what makes them tick – what drives them to be successful. The importance of Ronald Reng's biography of German goalkeeper Robert Enke is not in how it captures him on the field, but in how it chronicles his life and his battle with depression off it.

The story of Robert Enke is both tragic and distressing. It represented further proof, not that it should be needed , that footballers at the highest level are susceptible to mental health issues such as depression despite the glamorous lifestyles most lead, and that those of us on the outside can only dream of. Enke and his family and friends tried to hide his depression throughout his career, fearing public awareness of his condition would damage his reputation.

That they felt the need to take that course of action speaks volumes of the pressure professionals in any elite sport have to contend with. German football had already seen a high profile player suffer with depression. Sebastian Deisler was reckoned to be Germany's great white hope at the turn of the millennium having lit up the Bundesliga with Borussia Monchengladbach and Hertha Berlin.

Instead, Deisler arrived at Bayern Munich in 2002 on the back of successive knee injuries and would suffer at least one more major one which would restrict him to just 86 appearances in four and a half years. Deisler would also suffer bouts of depression for which he was treated in both 2003 and 2004. He would ultimately retire in 2007 and would later cite the pressure he was under at Bayern as a factor in his depression.

The importance of A Life Too Short in relation to raising mental health awareness should not be underestimated. It is a cautionary tale not only for high level professional athletes of all disciplines but for people in general given the number of lives that have been affected by this illness.

The author, Ronald Reng, was a close confidante of Enke's for much of his football career and we find out in the book that it was very important to Enke that he be able to tell his story someday. His intention, perhaps, was to tell it after he had retired, after he had escaped the pressures of the Bundesliga and the German national team.

“Today I know why the biography was so close to his heart,” Reng writes in a Life Too Short. “When his goalkeeping career was over, he would finally be able to talk about his illness. In our achievement-orientated society a goalkeeper, the last bastion in defence, can't be a depressive. So Robert summoned up a huge amount of strength to keep his depression secret. He locked himself away in his illness. So I will now have to tell his story without him.”

Enke took his own life on November 10th, 2009. He was playing for Hannover 96 at the time and was expected to be Germany's first choice goalkeeper at the 2010 World Cup in South Africa. He had been battling depression for six years, unknown to the wider public. His death came at a time when the suicide rate in Germany was increasing.

The fact that he committed suicide is important, but not as important as the fact that he had a life. The real tragedy is that Enke will always be associated with how he died; that how the things which really matter – his family, his ability as a goalkeeper, what he achieved at the clubs he played for and what he was really like as a person – are all considered secondarily or not at all by those who didn't know him.

Therefore, the balance Reng achieves in this book is an incredible one. He portrays the man and presents the obstacles he faced, both professionally and personally, while trying to plot a course through his friend's mental state with sensitivity and remarkable restraint – and without ever becoming too emotionally involved.

Even though Reng himself became an increasingly big part of Enke's life, he never intrudes on the narrative. Instead he uses the words of Enke's family, friends and colleagues – as well as quotes from the man himself, some so stark they can be difficult to read when put into the context of his death – to lay out Enke's life as it happened. The good times and the bad.

In this way, the readers can see the tell-tale signs of depression that too often are evident only after the fact. They may learn to recognise them in others or even in themselves. This can make all the difference. As Reng wrote himself, “It would be too much to hope that the illness will be understood all of a sudden. But perhaps this book will do something to help depressives find more sympathy and understanding.”

There is one more quote from the book which I wish to reproduce because I feel it is one of the most important. It is in relation to Toni Madrigal, a Spanish striker who would play a major part in one of Enke's lowest career points, a cup game between Barcelona – Enke's club at the time – and Segunda B side FC Novelda, which the latter won 3-2, Madrigal netting a hat-trick.

“Toni Madrigal doesn't believe that one game can transform a football career. But, he adds, thinking about Robert Enke, one evening can mark a life.”